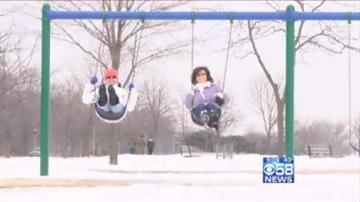 MILWAUKEE-Cloud cover, some peaks of sunshine and temperatures in the 40's. Winter weary folks didn't need any coaxing to get out and enjoy the outdoors on Friday.

\"We've been wanting to get outside for such a long time with the new baby,\"  Christine Scott Thomson told CBS 58 News. \"When it gets over 20 that becomes the time we can get outside.\"

We also came across Jill Jurkens and Helen Bagshaw having a great time on the swings at a local park.

\"Who doesn't love to swing?\" said Jurkens, \"It's just freeing and great to be out here today.\"

The break will be short lived.

First Alert Weather says skies remain cloudy with sprinkles changing to flurries late Friday night and into Saturday morning.  Lows fall into the mid 20's with a west wind shifting to the north at 5 to 15 mph.

Saturday:  After a cloudy start, clouds thin in the afternoon with highs in the upper 20's to low 30's.  Winds are from the north and northeast at 5 to 15 mph

Next Week:  Sunday is warmer with highs in the low to mid 30's under partly cloudy skies.

Monday warms into the low to mid 40's under partly cloudy skies.

A mix of rain and snow is possible Tuesday with colder highs in the mid 30's.

Partly cloudy skies are forecast Wednesday with highs in the mid to upper 20's.

Mostly sunny skies are forecast Thursday with highs near 30.  Friday warms into the mid 30's.