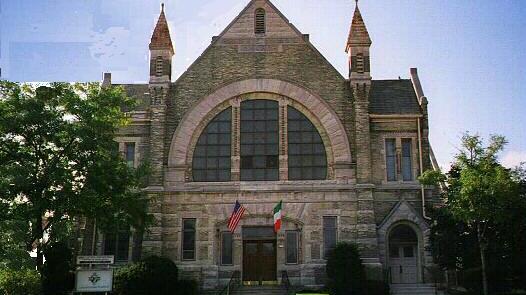 This Sunday, the Milwaukee area is hosting simultaneous celebrations of the 100th anniversary of the Easter Rising in Ireland.

CBS 58's Michele McCormack will joins members of the Shamrock Club of Wisconsin and others for the annual Easter Rising Mass at the Irish Cultural and Heritage Center or ICHC located at 2133 W. Wisconsin Avenue.

The Mass begins at 9:30 a.m. and does fulfill Easter obligation for practicing Catholics.

The Chaplain of the Emerald Society, Father Terry Brennan, is the celebrant.

There is free, fenced in parking in the back of the ICHC.

The performance is scheduled to begin at 1 p.m. at the tavern that's located at  8423 W Greenfield Ave.

CBS 58's Michele McCormack will read the proclamation of the Republic of Ireland at 2 p.m.

As documented on the official website of the Taoiseach in Ireland:

"The men and women of the 1916 Rising envisaged a new Ireland as a national democracy; an Ireland which, in the words of the Proclamation, ‘guarantees religious and civil liberty, equal rights and equal opportunities to all its citizens, and [which] declares its resolve to pursue the happiness and prosperity of the whole nation and all of its parts, cherishing all of the children of the nation equally.’   They believed that this could only be achieved through complete independence.

When they seized the General Post Office in Dublin on Easter Monday, 24 April 1916, the leaders of the Rising  proclaimed a free Irish Republic in which the egalitarian idea was centrally enshrined.  The Proclamation, which was first read out by Patrick Pearse on the steps of the GPO just after noon, declared the rights of the people of Ireland to be sovereign.  It looked forward to the establishment of a native Government elected on the democratic principles of self-determination and government by consent.  The 1916 rising set in train an unstoppable process which led to the separation of Ireland from Great Britain.

The events of 1916 must be viewed against the backdrop of the broader nationalist movement, the convictions of those who opposed any weakening of the link with the Crown and the momentous events being played out on the battlefields of Europe in one of the bloodiest conflicts that the world had ever seen. It should be noted that the continuing threat of conscription brought about by the manpower needs of the war consolidated the growing rift within the popular opinion. The ongoing frustration within  Nationalist Ireland  at the lack of progress on Home Rule, the prospect that it would not even be for the whole island, reinforced by the refusal of  the British War Office to allow the creation of a distinctly Irish Brigade, and its rejection of even an Irish divisional badge, was compounded by the abhorrence of the executions."

History of the Easter Rising Mass in Milwaukee

In 1970, Kit Nash brought the idea of commemorating the Easter Week Rising of 1916 forward to the Shamrock Club Board. His father had been a member of the Irish Republican Army that had rose up against the British forces stationed in Dublin. Kit suggested that an Easter Sunday Mass be celebrated to honor those who rose and were killed or captured, in order to bring forward an independent Irish State.

The first few years of the Mass were celebrated in the basement of St Rose of Lima Parish. St Rose's was a longtime Irish parish. The first years the attendance was about thirty to forty people.

The Mass moved to Marquette University High School's chapel for about a decade.

In later years, the Mass was celebrated at the Marquette University Union. Father Michael Maher, SJ, a Milwaukee native, was the celebrant for many years when he was teaching at Marquette. After the Mass, Kit and his wife, Josie, would open up their bar on Milwaukee's South Side, Nash's Irish Castle, for ham sandwiches and coffee.

By the 1990's, the Mass was outgrowing the MU Union chapel. When the Shamrock Club moved to their new home at the Irish Cultural and Heritage Center in 1996, the Mass was moved their, as well. Father Maher continued to celebrate the Mass each spring, even after moving to St Louis University and Gonzaga University in Spokane.
Father Terry Brennan, SJ, has celebrated the Mass in most years since 2005.

In 2011, Brian Witt took over the coordinating duties of the Mass from Betty Mikush. Betty is still the eucharistic minister coordinator.
Attendance at the Mass has grown since 1970, from about 30 people to a top of 250. The average attendance is about 220 a year.

The Mass is not intended as being the primary Easter Mass for people. The Shamrock Club offers the Mass as an honoring of those brave Irishmen and Irishwomen who came forward Easter Week of 1916. It is a Mass of Commemoration and Reconciliation.