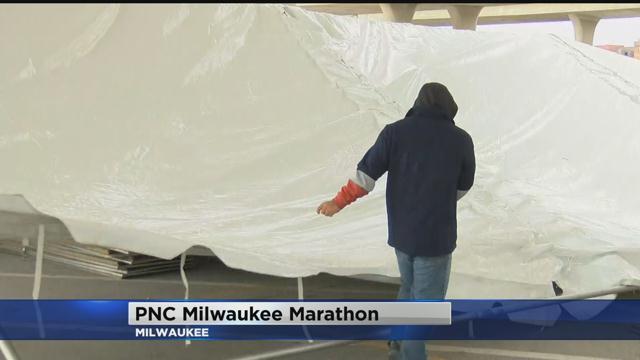 The Milwaukee Running Festival starts this weekend with events Saturday and Sunday.  The idea started years ago and really got going in the middle of 2014.  But at that point, it hit a snag when city leaders first heard about it.

At that point - North side Alderman Willie Wade told organizers the African-American community was being ignored by the Milwaukee Running Festival.  That's all changed now with collaboration between city leaders, race organizers, and businesses.

Race organizer Chris Ponteri and Alderman Wade worked together to reroute the race through areas on Milwaukee's North side. Wade says it shows how people can work together when the communicate their views.

"I saw this as an opportunity to bring a city together that has suffered so much division and so much isolation over some years," Alderman Wade said Friday. "This was an event that we all could agree on and bring the city together. I thought it would be necessary to make it go through the whole city."

Pointer agreed and said they always wanted to include as many neighborhoods as possible.

"We always wanted it to be an inclusive route of what our city is about," Ponteri said.  We've continued to work with the city to make it even more so."

The route runs through Washington Park and up Sherman Boulevard to Burleigh then comes back down on Sherman.

"We pretty much hit all the neighborhoods on the North Side, South Side, East Side, West Side, downtown, you got it, we're there," Ponteri said.  "You can do a lot of special things with 26.2 miles."

Wade says some areas get a bad name because of a few bad incidents.

"Sometimes people get a bad perception of what's really going on on the north side and they think that it's the O.K. Corral and that's not the case. There are beautiful hard-working families within those neighborhoods who enjoy all types of events, ethnic festivals, along with physical and health activities," Wade said.  "I thought that given the opportunity, that people will come and go through the community and see, that you know what, Milwaukee is a wonderful city, the whole city."

The Milwaukee Running Festival kicks off Saturday with a Milwaukee Miler Event and the Health & Fitness expo.  The 5k, half marathon, and marathon start Sunday morning with opening ceremonies at 6:45 am.