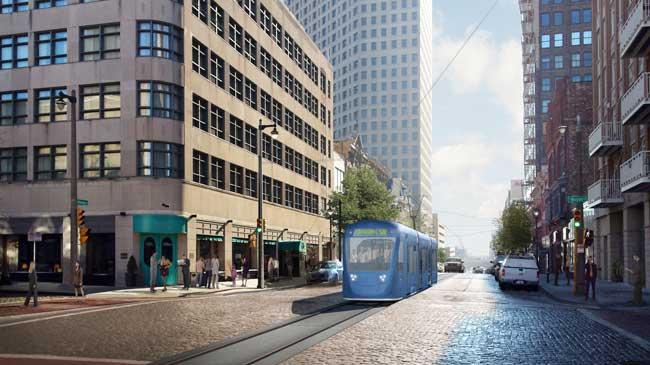 The Lakefront Line will connect Cathedral Square to the Lakefront using Milwaukee and Broadway and Michigan and Clybourn.

It will link to the planned $122 million, 44-story lakefront Couture development, which will incorporate a streetcar stop.

In addition to this extension to the Phase 1 route, the Mayor intends on additional system expansions into the neighborhoods as part of a modern streetcar network improving transit across the City.

“This critical federal grant for the Milwaukee Streetcar will bring thousands of residents and visitors to major attractions and new developments on Milwaukee’s lakefront,” Mayor Barrett said.  “This announcement builds on the positive momentum we’re experiencing in the heart of the City and will also have a significant impact on our neighborhoods creating hundreds of construction jobs and better connecting our neighborhoods to downtown.”

“This is a strong federal investment in 21st century Wisconsin infrastructure that will put people to work,” said Senator Tammy Baldwin.  “The Milwaukee Streetcar will also help spur significant economic development and improve the quality of life for Milwaukee residents.  I’m pleased to see this important project move forward and proud to have helped secure this investment in Milwaukee’s economy.”

The Common Council in February approved $14.2 million for the Lakefront Line as part of the vote in support of the Phase 1 route.  The federal award was from the federal TIGER (Transportation Investment Generating Economic Recovery) program.  The Department of Transportation was to award $500 million in TIGER grants this year, although it received $9.8 billion in grant applications.

The funds will be for the construction of the Lakefront Line and to purchase one streetcar vehicle that will operate on the line.  A portion of the funds will also be used to add a second track on St. Paul Avenue, between North 2 and 5 Streets, in order to give the system more flexibility and to allow the Lakefront Line to run between the Milwaukee Intermodal Station and the lakefront during special events, such as Summerfest and the Fourth of July.