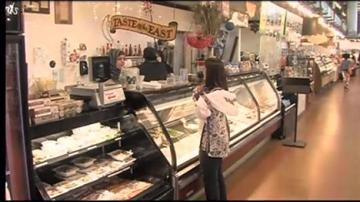 MILWAUKEE -- Twenty-four hours after it was evacuated because of a mysterious underground fire, the Milwaukee Public Market is back in business.

Customers wandered about and all of the 17 vendors were ready to serve them.

It's almost like nothing ever happened, but what did happen put the Public Market's emergency plan to the test.

The Third Ward destination opened in 2005.

Paul Schwartz, operation and communications manager, said Tuesday was the first time the market had to evacuate.

There were up to 75 customers inside at the time of the scare, plus staff.

Schwartz said what could have been a chaotic situation to get everyone to safety was calm and organized thanks to protocol.

\"What we try to do first is get to vendor employees so they can communicate to any customers coming in as well,\" he said. \"At that point, we have each person stand by each doorway, filter them out and make sure no one was left inside or in the basement and then lock all doors.\"

Staff will re-evaluate the procedure, but say at this point, little if anything, would change.

The Public Market did lose a full day of business because of the evacuation and precautionary closure, but Schwartz said the one day will not affect this year's bottom line.
Share this article: