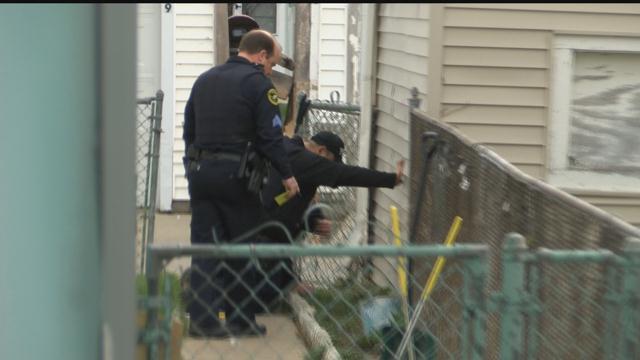 Milwaukee police say they had to shoot a charging pit bull Friday morning and the owner was hit by one of the bullets.

"I get an awakening call that she's crying and screaming, and all I hear is 'the dog's shot, I've been shot,' " said the victim's nephew, who lives in the same home.

While Milwaukee police were in an alley on South 9th Place investigating a shooting early Friday morning, a 46 year old woman was outside too, just a few houses away.

Police say they found shell casings from that shooting and during their search a pit bull came charging from that woman's yard toward an officer who then shot  at the dog.

Police say one of the bullets ricocheted hitting the woman.

"Two for sure hit the dog and the other one either grazed her leg," said her nephew.

Her nephew tells us the woman was here in her own yard, letting out her dogs. The problems began when police opened up the gate.

"I know they were just doing their jobs but I told the officers...Why couldn't you guys have called the owners to get the dogs first before you opened the gate?" said the nephew.

This picture of the dog as a puppy  is the only photo the family could give us.

But the woman's nephew. who didn't want to go on camera told us the dog is not aggressive.

"He knows right from wrong and is a very obedient dog. If you tell him to sit he'll sit if you ask him to stay he'll stay; he was probably just curious. Just walked forward and the officer might have been scared," said the nephew.

The woman went to a local hospital for treatment on her leg and the dog was taken to an emergency vet.

"He has a bullet in his belly, a couple fragments and then a leg was injured, grazed his front leg and his back leg," he said.

And while the family says they understand the officer's actions they wish things had been done differently.

The woman is now at home recovering and her dog is also expected to be OK.