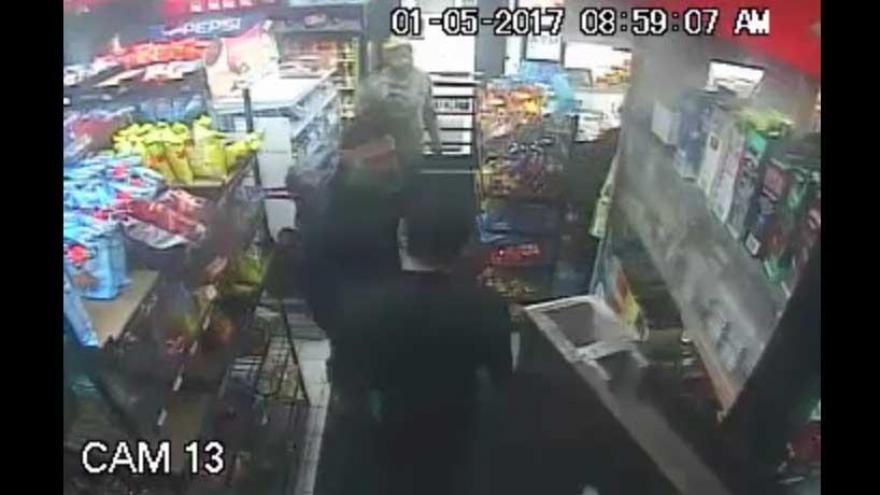 Milwaukee Police are asking for the public's help in locating the suspect wanted in connection with the January 5 homicide in the 2600 block of W. Lisbon Avenue.

The suspect in this case is the man in the black coat and green scarf.

He is described as a black male and believed to be in his 30's, around 6-feet 2-inches tall, with a light complexion.

Milwaukee Police would also like to speak to the other two people in the video.

A gas station clerk trying to chase off a robbery suspect is beaten to death in the street.

It happened this morning at the BP gas station on 26th and Lisbon.

Milwaukee Police continues to seek the suspect and the investigation is ongoing.

Milwaukee Police confirmed he was struck by a bat.

The gas station reopened a few hours ago.

CBS 58 was told the employee was killed by the shoplifter.

There was a struggle and that is when police say the employee was killed.

CBS 59 spoke with a passerby who said she never stops for gas at this gas station because this area has gotten way too dangerous even in the daytime.

Darrell Pate owns Dep's Hall of Fades across the street and saw the aftermath.

"The gas worker seemed to have chased the thief with a baseball bat. I believe he threw the bat at the baseball thief. The thief picked up the baseball bat, attacked the man from behind and beat him to a bloody pulp. This is not the kind of pub you want for your business or the area. I definitely think this is counterproductive,” said Pate.

There is no description yet tonight of the suspect that police are looking for.