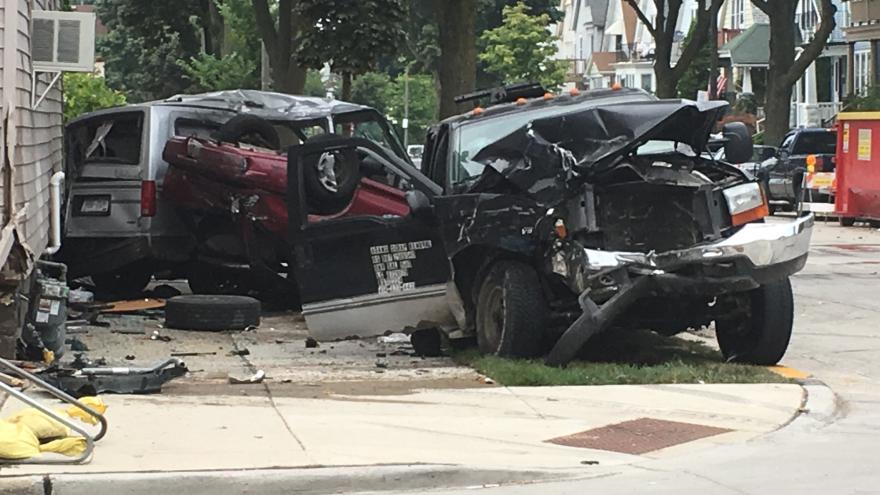 MILWAUKEE (CBS 58) -- Charges could be coming soon after a serious crash involving a tow truck driver in Riverwest.

Police say a 29-year-old woman was arrested in western Wisconsin. The tow truck, being pursued by police, hit two vehicles near Pierce and Locust. According to police, the woman then got out, stole another vehicle and escaped.

Police say the woman will be brought back to Milwaukee where she could face several charges, including hit and run, battery to an officer, and strong arm robbery.

The tow truck company initially said the truck was stolen however, they are now saying they sold the truck and the new owners never took their name off it or registered it.

MILWAUKEE (CBS 58) -- The suspect identified as a 29-year-old Milwaukee woman was arrested in western Wisconsin on Wednesday. Milwaukee Police Officers have taken the woman into custody and are bringing her back to Milwaukee.

The company that owns the tow truck tells CBS 58 the truck was stolen.

MILWAUKEE (CBS 58) -- The Milwaukee Police Department is currently investigating a serious crash that happened this afternoon near Pierce and Locust.

According to police, officers attempted a traffic stop of a tow truck that was towing a vehicle. The tow truck fled approximately one block then crashed into an eastbound vehicle and a parked car at Pierce and Locust Streets.

The suspect, and driver of the tow truck, fled on foot and entered the parked vehicle of a witness who stopped near the crash.

After a struggle, the suspect took the witness' vehicle and fled the area.

The witness' vehicle has since been recovered and police continue to search for the suspect.

Several people were seriously injured in this accident and taken to a local hospital.