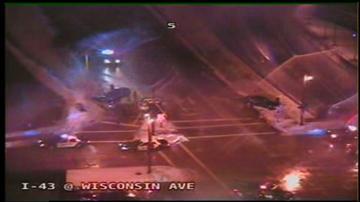 MILWAUKEE-The sheriff's office is investigating an accident that happened on I-43 at the Michigan Street off ramp around 7 Friday night.

According to the Sheriff's Office a car slid down the ramp and hit a police squad car.

The officer in the squad car was taken to the hospital for minor injuries.

No word on his condition.

The crash is still under investigation, but it's believed to be weather related.

There was rain and freezing rain falling at the time of the incident.

\"We are investigating a squad accident that occurred on the exit ramp of I-43 at 10th Street, at about   The squad was stopped behind two vehicles that were involved in an accident.  The squad had the red and blue emergency lights on.  A vehicle that was exiting at this exit was unable to stop due to the icy conditions and struck the rear of the squad causing damage.  The officer in the squad is being treated at a local hospital for minor injures and is expected to be released this evening.\"
Share this article: