MILWAUKEE (CBS 58) -- Milwaukee Police are planning to increase the number of squads with GPS tracking equipment, as part of an effort to reduce police pursuits.

The technology, called StarChase, allows officers to attach a GPS "dart" to the back of cars eluding traffic stops.

Right now, 18 squads are equipped with the equipment, which has been in use since November of 2015.

In a September 15th letter to the Fire and Police Commission, Chief Ed Flynn says he has "worked with the city administration so that all new department vehicles will be equipped with StarChase equipment going forward.

Calls to Mayor Tom Barrett regarding funding for the technology were not returned.

Milwaukee Police have used the StarChase equipment 172 times so far this year, with 116 successful deployments.

The department says those deployments have resulted in 47 arrests.

It costs $4,600 to outfit one squad with the technology.

In a statement to CBS-58, StarChase President Trevor Fischbach said "Success rates and percentages aside, I strongly believe that each time a StarChase tag is launched a life is saved and injuries are avoided." 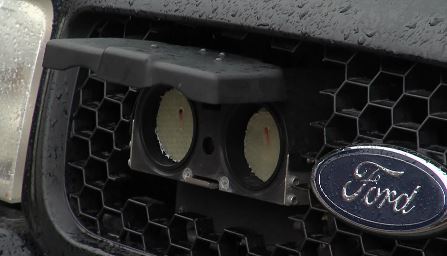 StarChase uses a "grille-mounted GPS Launcher System" to shoot "tags" that attach to a suspect's vehicle. Those tags can be launched through a console inside the squad car, or through a remote key fob held by the officer. Those tags allow police to monitor the car's location in real-time, while maintaining a safe distance.

Police pursuits have been a hot topic of late, with the FPC ordering Chief Flynn to loosen regulations for when officers can pursue fleeing drivers.

"I think the whole commission is in favor of expanding StarChase," DeVougas said Thursday night. "We're excited to see the chief is going to use that and deploy that tool in his broader strategy to address the stolen car situation."

New numbers released this week show more Milwaukee drivers are choosing to disobey traffic stops than ever before. MPD began logging "non-pursuits", defined as a driver refusing to pull over for a traffic stop, in 2014.

Milwaukee Police say the exact number of vehicles being equipped in 2018 has not been set.