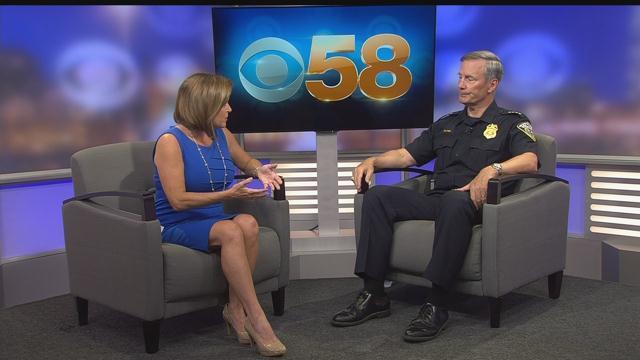 Police Chief Ed Flynn is weighing in on a proposal to let Milwaukeeans decide if they want to pay higher taxes for more officers.

" I would like to believe that that would be enough," said Flynn during an interview Thursday with CBS 58 News. "I come to find out the state would punish the city if it does that."

The chief repeating his long held sentiment that the state isn't doing enough to support Milwaukee in its attempts to clamp down on crime.

This most recent proposal to put officer staffing up to the public vote has been shelved for the time being.

This after it was learned that state could withhold funding from the city, if such a measure as currently drafted was passed.

"My experience has been that people are willing to spend more money on police officers to make their neighborhood safe," said Alderman Alderman Tony Zielinski who is a co-sponsor with Alderman Terry Witkowski. "What cost can you put on that?"

If the item passes, the city would have the go ahead to increase property taxes an estimated $81 million over five years.

That would fund roughly 150 officers.

It was put on hold earlier this week after concerns were raised by Mark Nicolini, Budget and Mgmt. Director of the City of Milwaukee.

"The concern is the way the initiative is framed," explained Nicolini. "Over two years we would lose approximately $17 million  of state aid and would have to substitute local property taxes. That's a major concern."

Chief Flynn said it was yet another example of Madison not responding to the needs of an urban community.

"It can't be forgotten that the amount of money the city has received in shared revenue from the state has declined every year I've been here," The chief lamented. "When I first came here, shared revenue paid for the entire police department. It doesn't anymore. We're $17 million down."

He says he's hoping that the same community leaders who are critical of police actions, will also try to persuade young men and women of color to become a police officer and be part of the improvements.

Chief Flynn says only time will tell if a series of public safety committee meetings at City Hall lead to any kind of action.

He said the hearings have opened up the discussion to the d.a.'s office, to the chief judge, to probation and parole and the juvenile corrections system.

"All these systems players who have a major impact on the results of our work. We can make arrests but we don't decide to prosecute."

He said it was good to get each division to present their version of the facts and what they believe is their responsibility.

"It's up to the committee to take that information and make sense of it and decide whether it is sufficient to the needs of Milwaukee," concluded the chief. "We'll see what they do."

Chief Flynn was also asked to give his view of comments made by Alderman Mark Borkowski. In particular, his statement that we'll see if Chief Flynn lasts the full three and half years left on his contract.

"I'm gradually learning not to be surprised by his outbursts," Chief Flynn told CBS 58's Michele McCormack. "That's clearly his style. I report to the Fire and Police Commission, not the city council. I suspect he feels frustrated. We do all we can to be helpful to all the aldermen. I'm not shocked by political outbursts."

Chief Flynn also noted that his department was the first to be called before the committee.

"Perhaps as time went by he listened more, spoke less and learned more," Flynn said of Borkowski. "I hope so. He's got an important job. And I'd prefer if his statements were related to reality and not opinion."