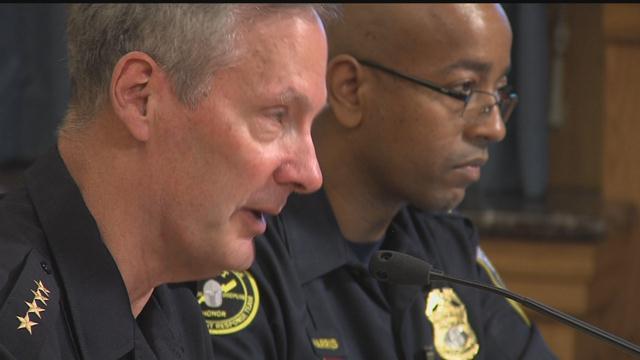 Chief Flynn said juveniles are disproportionately represented among the offenders and suggested Milwaukee County is not providing proper supervision after arrests.

"A few days ago a Chrysler Cirrus was stolen from the Gwen T. Jackson school. Officers were conducting an investigation and this car slowed up, drove past, and cursed and taunted at the officer and then drove off very quickly," Chief Flynn said.

"An attempt to taunt and engage the police is a new phenomenon in the experience of our officers," Chief Flynn said of that case where suspect would later be identified as mostly juveniles.

He explained that feats to earn street cred is a growing motivation for youth offenders. Chief Flynn placed some of the blame on underfunded youth justice services and a cycle of catch-and-release arrests.

"Okay that moment of 'Oh, I'm caught. I'm going to be in trouble.' Poof. They're not in trouble. And even when they're put on supervision nobody is really supervising them," Chief Flynn said.

Council President Ashanti Hamilton asked for ways that rehabilitation could be improved.

"Simply sending children back to the environments that couldn't supervise them in the first place, it's not in the best interest in the child - I don't care what kind of analysis you're using - nor is it in the best interest of the community we're sending them back to," Ald. Hamilton said.

One proposal that gain traction during discussion asked if it would be possible to allow police to have realtime access to ankle bracelet monitoring. That's something officers don't currently have - with Chief Flynn saying social workers often don't know where their client is until that client is under arrest.