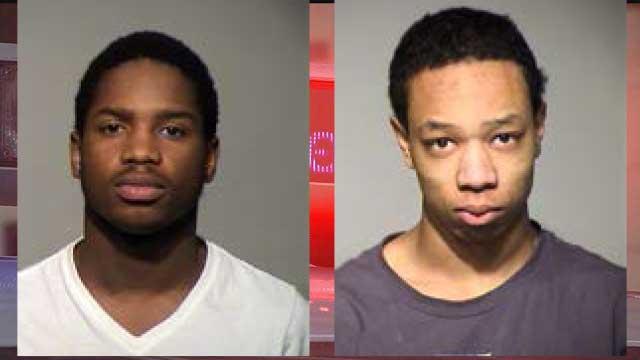 The suspects reached in through the broken windows and stole items from the vehicles’ consoles.  A total of 58 vehicles were damaged on January 30, 31 and February 2 and 3.

A Milwaukee County Sheriff detective notified area law enforcement agencies to be on the lookout for a stolen red Ford pickup truck that he determined the subjects were likely using.  The pickup truck was stolen from the airport on February 2.

Greenfield police officers spotted the vehicle on Thursday, February 4, in a restaurant parking lot after receiving a call about car windows shot out in the area.  They observed two subjects leave the vehicle and apprehended one subject as he left the restaurant, the other after a short foot chase.

Detectives responded and took the two male subjects, Earl Blackman age 18, and Paris Chambers, age 17, of Milwaukee, into custody.  They recovered a large amount of BB’s and BB gun cartridges, a BB gun rifle and three BB gun pistols from the truck.  A detective matched one of the suspect’s shoe prints to a print found on one of the damaged vehicles from the parking structure.

Both of the subjects confessed to the incidents and are awaiting criminal charges.

One of the subjects was released from custody in January on a $500 PR bond.  He was scheduled to appear in court on February 9 for two felony charges of theft of property.

Other area police agencies throughout the county are conducting investigations regarding similar shooting incidents in their jurisdictions.  Charges under consideration are felony Operating Vehicle Without Owners Consent and Fleeing, and multiple counts of Criminal Damage to Property. The case was presented to the District Attorney’s Office today.