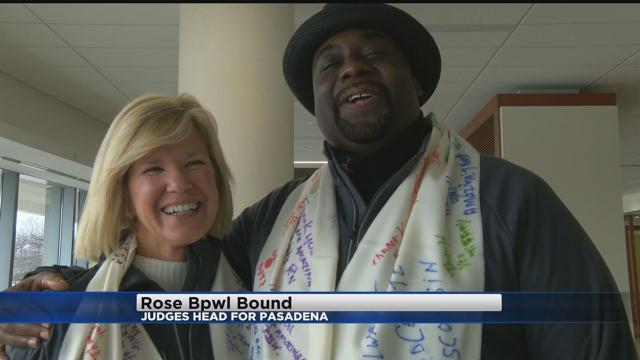 The Wisconsin Badgers aren't going to the Rose Bowl this year, however, two Milwaukee judges are. They share a life-saving bond, thanks to a kidney donation earlier this year.

The two friends are making it their mission to promote organ donation. They are both very different. Mosley is an African-American male and Eiring is a Caucasian woman. They differ in age as well and this is why they are sending a message that anyone can donate a kidney and save a life.

Mosley said, “I had my transplant July 20th and I feel fantastic. I haven’t felt this good in about 5 years.” Eiring said, “I really feel no different. I have a small scar in my stomach and other than that I’m the same person I was on July 19th.”

At Froedtert Hospital they had a small send off for them at the Transplant Center.

Doctors and medical staff signed scarves thanking them and wishing their good luck. The Rose Bowl is on January 2nd and they will both be wearing their scarves as they walk in the parade.

This life-saving donation made a difference for Mosley during the holidays.

"I was doing dialysis prior to the transplant and so for every Christmas I was never able to get downstairs in time to watch my kids open their presents because I was hooked up to the dialysis machine," Mosley said. "This is the first year that I was actually able to go down while they opened their gifts so I texted her right away and said I'm sitting here downstairs in tears watching my kids open up gifts and it's all because of you so thank you for that."

They will be meeting other donors and recipients and will walk with them in the parade.

Eiring said, “It’s just overwhelming I guess. I look forward to meeting other donors and recipients as well and hearing their stories.”

Mosley responded, “It doesn’t matter if you are black, white, male, female, big, little, you can save somebody’s life.”