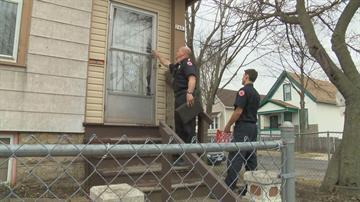 MILWAUKEE -- Knocking at each door in a midtown neighborhood Saturday, firefighters tried to extinguish a certain mindset.

Members of the Milwaukee Fire department checked for working smoke alarms near 24th and Vliet.  That's where a 35-year-old man died in a fire Thursday night.  There were no working smoke detectors inside, which has been common among the 115 fires in Milwaukee this year.

\"About half of them have been without working smoke detectors,\" Smoots said.

Milwaukee Firefighters started doing this in the 1980s after 13 children died in several fires just hours apart.  The fire department thinks the program has helped, but there's more work to do.

\"[People are] more worried about getting mugged or something like that than they are about fire,\" Smoots said.  \"They think the smoke, they'll start coughing and wake up.  The smoke doesn't wake you up, it actually puts you in a deeper sleep.\"

Donald Jones lives up the street and knew the victim.  He thinks the fire was a wake up call.

That includes renters.  Landlords are legally responsible for installing smoke alarms, but that doesn't always happen.

\"It's better to have it on your own,\" Smoots said.  \"If that's something your landlord doesn't give you, I wouldn't wait for them to get it.\"