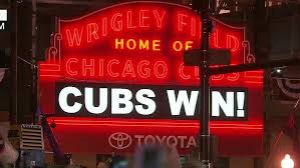 CBS 58— Cubs fans from across the country will head to Chicago Friday for a victory parade and rally, including fans from the Milwaukee area.

Nick Comella, a University of Milwaukee student, spent 21 years hoping for a Cubs World Series win. Now that it’s happened, he can’t really put his emotions in to words.

“I feel like I haven't even enjoyed it yet,” Comella said.

Raised a Cubs loyal by his dad, Comella knows there are other fans who waited much longer for this championship. And some, like Nick's step grandfather, who never got to see it happen.

“It's a really difficult topic actually,” Comella said. “I really wish he got to see it. I know he's watching from somewhere else.”

After the final out, Nick knew he had to be at that victory parade, and luckily his co-workers stepped up to cover his shift.

“It's definitely going to be the best day of my life,” Comella said.

Comella isn't afraid to admit this post-season was filled with tears, when the Cubs were winning, when they were losing and when they finally claimed the series.

“Definitely, there is crying in baseball.”