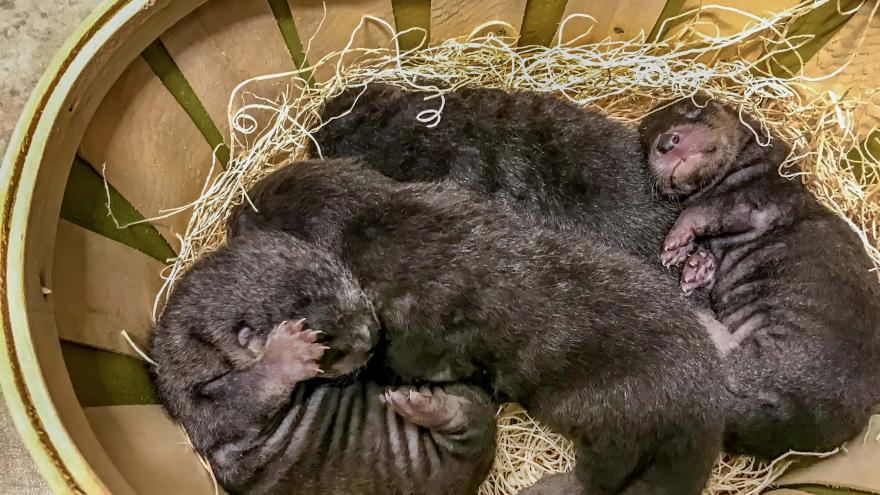 Born Feb. 7, three male and one female pup were born to mom, Shamrock, and dad, Malarkey (Larkey). The Zoo says this is the first surviving otter litter for the pair, and for the Zoo!

According to the Zoo, Shamrock is displaying excellent maternal care toward the pups. Animal care staff comment that she’s extremely attentive and stays with the pups nearly every hour of the day, in an off-exhibit holding area. She cleans and grooms the pups and has even been seen bringing her food into the area to be close to them.

While the Zoo’s other female, Clover, and male Larkey remain in the outdoor habitat, Shamrock and the pups are living together (the pups are usually curled up in a ball next to each other), in the indoor maternity den, with soft, natural bedding material for warmth and comfort. The den consists of several separate habitat areas, or compartments, for Shamrock to easily move the pups from one area to the another if she decides.

One of the compartments has a nest box, and the entire den, or suite, is quiet, with additional heat and humidity to keep the pups comfortable in their first weeks of life.

Because this marks the first successful litter, zookeepers are careful to keep a consistent daily routine for Shamrock, so there is no distress during her days and nights. The pups are weighed daily, always at the same time. At birth the pups weighed 125 grams each and have continued to gain weight every day since.

Keepers closely monitor mom and the pups and report they appear to be healthy and developing well.

Shamrock is nursing the pups, who should be fully weaned at 3-4 months. In 42-56 days, they’ll begin eating fish that the keepers will “mash” for them, or fish that Shamrock drops from her mouth! North American river otter pups are born with their eyes closed, and they’ll remain closed until about 1 month old.

As the pups continue to grow and mature, keepers are noticing some “squirming” and “belly crawling” in the holding areas. At times, Shamrock may leave the pups for a very short period during the day for a quick swim in the indoor holding pool, but she immediately returns to them afterward. She takes her swim only after nursing the pups.

Keepers say they usually see the pups nestle together and sleep many hours of the day. It’s expected the pups will learn how to swim from mom, at about 1 ½ months old. They will walk first, and then learn how to swim in the indoor pool.

Shamrock and the pups, who have yet to be named, will remain off-exhibit for the next few months.

Animal care staff are keeping a watchful eye on them, and the Zoo will regularly update visitors on their progress.