Milwaukee County sheriff's deputy injured in accident on US-45 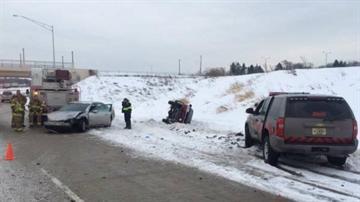 MILWAUKEE -- The Milwaukee County Sheriff's Office reports one of their deputies was injured while at the scene of a rollover crash on US-45. The sheriff's office says their deputy was pulled over and had emergency lights activated.

We're told the motorist lost control while traveling south on US-45 and hit the deputy's squad vehicle and hit a fire engine. The injured deputy was transported to Froedtert Hospital with non-life threatening injuries.

No injuries were reported in the rollover accident the deputy initially responded to, and the driver who struck the deputy's vehicle was not injured.