Milwaukee Businesses Shut Down for "Day Without a Latino" Rally 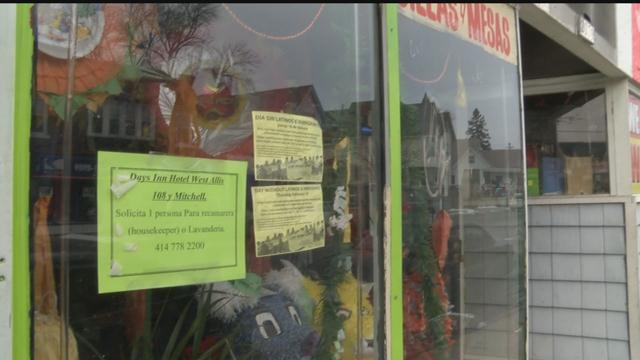 In Milwaukee dozens of Latino-owned businesses closed for the day on Thursday as employees headed to Madison for "The Day Without Latinos" demonstration.

On Cesar Chavez Drive customers say it is disrupting their daily routine - whether it's the closed corner stores or being unable to get groceries.

Miguel Rullan owns Miguel's Barber nearby. He says he has been cutting hair for 25 years. He's Puerto Rican and does not face the same legal risks as other Latin Americans if tougher immigration laws are passed.

But he says his neighborhood would.

Just across the street "Romero's" - a corner shop selling pinatas - was closed for the day as workers demonstrated in Madison.

Rullan says those closures are just one way people could be effected. For example, customers drove in and out of the parking lot of El Rey grocery store only to find it shut down temporarily.

"I'm kind of shocked that it's closed but it's for a good reason," Lily Gutierrez, a shopper, said.

"I remember when I first came to the United States there was a lady who said 'Boy, if you didn't talk I wouldn't know that you were Hispanic because I look American ... Quote, unquote," Gutierrez said.

"I think what they have done today is a very good thing...I'm just hungry and I'm wondering where I'm going to go and eat," Gutierrez said.

The guys at the Miguel's Barber Stopped at Wal-Mart for food but said they prefer El Rey.

One of the barbers, Carlos Gandia, said he'll go back to his normal routine tomorrow.

"No matter what, if you're Mexican, Puerto Rican, from Peru - everywhere - we're Latinos. We're as one. So whatever happens to them happens to us, you know?" Gandia said.

El Rey closed not only their Cesar Chavez Drive store but also its factory and it's other locations. About 400 of their workers planned to attend Thursday's rally.