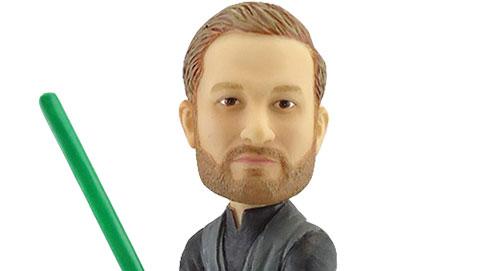 Milwaukee Brewers will host Star Wars Night on Saturday, May 30 as they battle with bats, not lightsabers the Arizona Diamondbacks at 3:10 p.m.

A number of Star Wars characters will make special appearances throughout the afternoon and evening. Fans are encouraged to dress in costume and are permitted to wear masks, but the Brewers ask all aspiring Jedis to leave their lightsabers at home. Any and all lightsabers, toy guns or weapons will not be permitted in Miller Park. Fans will still be permitted to use the Force, so long as they do not bring in an actual device.

Earlier this month, fans were asked to post an original video to reenact their favorite Star Wars scene and/or deliver their favorite line from the film on Instagram and/or Twitter using the hashtag #PitchFirstIWill. Patrick Ryan won the contest after submitting this video (https://goo.gl/p8qPsL). He won four Loge Infield Box tickets to the game along with four Jedi Luc bobbleheads. Ryan also won the opportunity to throw out the first pitch prior to the game.

For more information about Star Wars Night presented by Kohl's or other theme nights at Miller Park visit Brewers.com/specialevents.