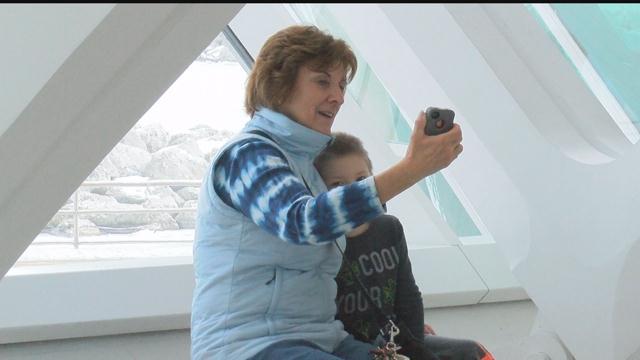 How often can you point to a picture of yourself and say 'that's a genuine work of art'?

You can do it if you *include* a work of art in your picture as a lot of people did today at the Milwaukee Art Museum.

Wednesday is 'International Museum Selfie Day' and visitors were encouraged to join millions around the world, not only in taking a selfie with an art work, but they were also encouraged to post it on social media.

"Well Andy Warhol is a real favorite, so that selfie in front of Marilyn Monroe is a real takeaway.  Also the janitor, Duane Hansen's Janitor is another one that people really love to take a picture of.  But I'm always surprised by the works of art that kids are attracted to, they're not always the ones that I imagine."

Milwaukee Art Museum has, also, launched new app for young visitors – ages 4-7 and 8-12 years-old.  It is the first museum app developed specifically for audiences this young.

The "A is for Art" audio tour experience is designed for the Museum’s youngest visitors aged 4-7 and is charmingly voiced by child actors. By way of this tour, kids are immediately engaged in the ABC’s of what they are seeing in the artworks, starting with “A is for Angel” at  Abbott Thayer’sAn Angel (1893) and ending with “Z is for Zoo” at Giovanni Castiglione’s Noah and the Animals Entering the Ark, (ca. 1650).  The app features short audio excerpts that encourage discussion between the adults and the children in the group.

The "Eye-Touch" tour is for children aged 8-12 and uses a mix of audio, video and interactive games to introduce kids to more than 40 works in the collection. The tour balances fun experiences – such as behind-the-scenes video footage of artists at work and on-screen activities, with audio-messages aimed at helping kids to look closely and engage with the art. As an example, children can see a spoof weather report from a local meteorologist based on a painting they’re observing – or participate in games where they pick and mix together the sound effects.

Antenna has taken the popular social media phenomenon – “selfies” – and created the “Art Selfie,” a fun camera function to encourage kids to connect directly with the art they are looking at, and in turn, be creative themselves. Using the camera, kids take a Selfie and insert themselves into a selection of art works, then share the resulting image on social media or save them on their device.  This feature uses the Museum’s collection of anonymous 18th and 19th century portrait miniatures to give visitors a chance to see how they would look as a work of art.