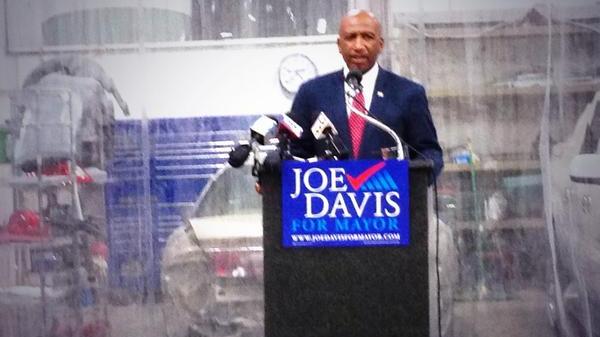 A second Milwaukee Alderman has announced his candidacy in the 2016 Mayor's Race.

\"I have decided not to seek re-election as Alderman for the 2nd district of the City of Milwaukee, and announce my candidacy for seeking the office of Mayor, for the city of Milwaukee,\" said Ald. Joe Davis.

\"The moment of truth came with the handling of the Dontre Hamilton situation and the case,\" said Davis.

Davis says fall out from the Dontre Hamilton case was a turning point as he contemplated a run in the mayor's race.  During his speech, Davis pledged his commitment toward fighting poverty, crime, and the city's racial divide, while being a responsible steward of taxpayer dollars.

\"This type of bull-headed governing has to stop,\" said Davis.

Ald. Bob Donovan is the only other candidate who's officially entered the 2016 Mayor's Race.

Donovan said in a statement--  \"I welcome Joe into the race and think it speaks volumes to the level of concern we have for the City of Milwaukee.\"

\"I think for the next 18-months I'm going to focus on trying to make this a better place to raise their families,\" said Mayor Tom Barrett, \"and for jobs to be created, that's what this is all about,\"

Although Barrett hasn't announced re-election plans, he gave CBS-58-- a little more insight into what's ahead.

The mayor will hold off on his official announcement, but for Davis-- the campaign starts now.

\"With your support-- it's game on,\" said Davis, to his supporters, \"God bless you, and God bless the city of Milwaukee.\"