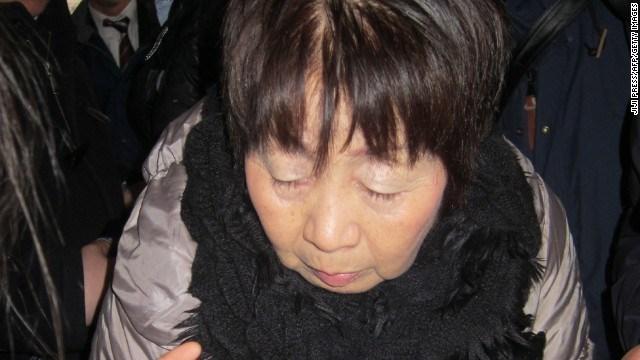 A 67-year-old woman who reportedly received millions in life insurance money from at least five of her previous partners has been arrested on suspicion of poisoning her last husband with cyanide -- the latest high-profile case in Japan involving so-called \"black widows.\"

Chisako Kakehi, who benefited to the tune of 800 million yen ($6.8 million) over the past 20 years, according to Japanese media, denies any wrongdoing.

\"I didn't kill him. I don't know how to kill ...\" she told police, according to CNN affiliate TV Asahi.

But an autopsy report on Iso Kakehi, her fourth husband to die, found cyanide in his stomach and blood.

The 75-year old died in December, less than two months after their wedding. It triggered a police investigation into the case, which culminated in Kakehi's arrest in Kyoto on Wednesday.

A previous fiancé, who died when he crashed his motorcycle, was also found to have traces of cyanide in his body.

Police would only say \"many\" of her previous partners -- who were aged between 54 and 75 -- had died in the past two decades.

However, authorities may be unable to prove she killed her other lovers because autopsies are generally rare in Japan. Her first husband died back in 1994.

Kakehi is the latest \"black widow\" to make the headlines in Japan. Kanae Kijima is currently in prison after being found guilty of killing three men she met on dating websites in 2009 and making it look like suicide in each case. She was 37 at the time.

Both are appealing death sentences.