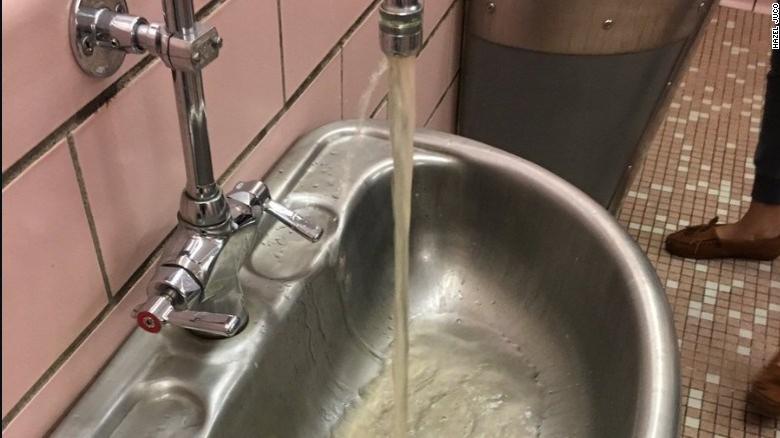 (CNN) When Hazel Juco noticed the water in her high school restroom looked like urine, she snapped a photo and posted it on Facebook and Twitter.

The next day, the senior at John Glenn High School in Westland, Michigan, was suspended.

"I was called to the office and told by one of the assistant principals that an administrator found a photo of the girl's bathroom on social media and that I'd be issued a three-day out-of-school suspension for 'inappropriate use of electronics,'" Hazel told CNN.

The school, like many around the nation, has a rule that prohibits the use of cell phones inside restrooms to respect the privacy of others.

But parents and students were outraged. They thought the school ought to be more concerned about the water than the phone rule.

In response, dozens of students posted pictures taken of themselves in the school bathroom.

When Wayne-Westland Community Schools superintendent, Dr. Michele Harmala, got wind of the uproar, she expunged the suspension from Hazel's record.

The rule, she told CNN affiliate WXYZ, was designed to protect inappropriate photos of students; not maintenance issues.

She also discovered the school hadn't reported the water issue.

"I reached out to them. They sent a plumber out right away," Harmala said. "We had a pipe that reached the faucet that was corroding and needs to be replaced and that's underway right now."