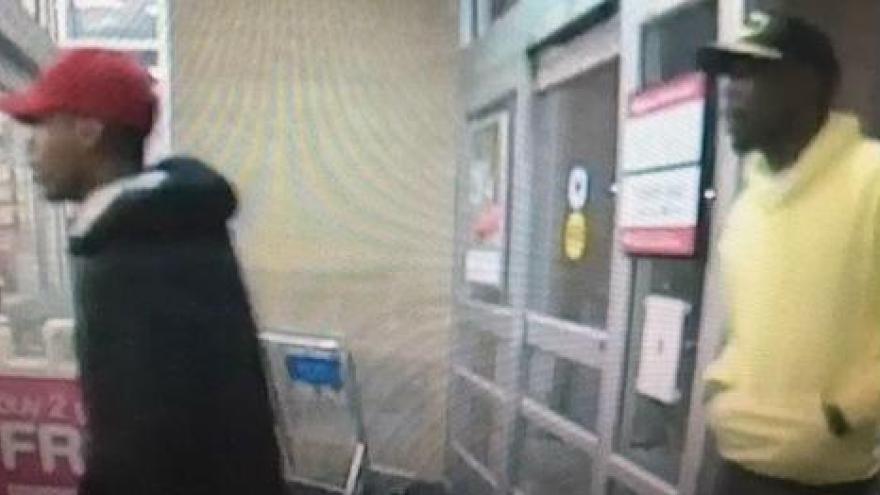 MENOMONEE FALLS - The Menomonee Falls Police Department is asking the public for help in identifying two suspects that robbed the Walgreens on Appleton Ave at gunpoint Friday afternoon.

The two suspects entered the store and proceeded to the pharmacy where they lingered until no customers were visible. Both suspects jumped the consultation counter and approached the pharmacist at gunpoint demanding Oxycodone and Percocet.

Both suspects loaded up a backpack and duffle-style bags, exited the pharmacy by jumping the counter, and walked out of the store.

Suspect #1 is described as a black male, gold teeth, and a small patch of facial hair on his chin. He was wearing a black and yellow Batman logo baseball cap, yellow sweatshirt, gray sweatpants, gray and black tennis shoes, and was carrying a red duffle-style bag. This suspect was armed with a matte black semi-automatic handgun.

Suspect #2 is described as a black male, 130-150 pounds with a mustache, wearing a red Wisconsin Badger baseball cap, gray sweatshirt, tan khaki pants, white shoes with black laces, and carrying a purple and gray backpack. He also has an unknown tattoo on the right side of his neck.

Both suspects left the store on foot.

These suspects are believed to be responsible for a string of robberies including one that happened on March 8th at the Walgreens on 27th Street (SEE THE STORY HERE)  and also a Walgreens robbery on March 10th at the S. Howell location.