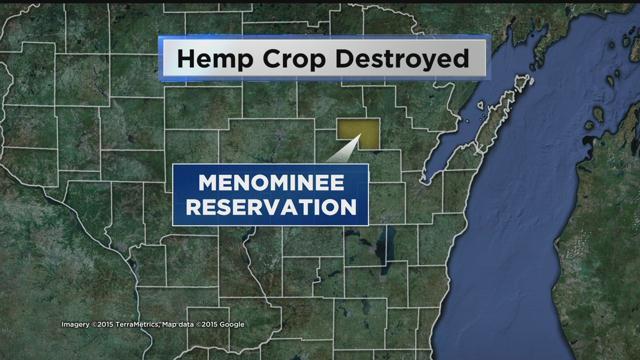 Federal Agents destroyed Menominee Indian Tribe of Wisconsin's industrial hemp crop on Friday, October 24, according to a statement by the Tribe.

In May 2015, tribe had legalized the growing of low THC non-psychotropic industrial hemp by Tribal licenses on its land.

In 2014 Congress had passed a Farm Bill which recognized a distinction between marijuana and industrial hemp that created an exemption to the Controlled Substance Act to allow for growth, cultivation and the study of industrial hemp in certain circumstances.

The hemp crop was intended to be a legal crop allowed by the Farm Bill, according to the statement.

In response to the federal actions, Chairman Besaw said the following:

"I am deeply disappointed that Obama administration has made the decision to utilize the full force of the DEA to raid our Tribe. We were attempting to grow industrial hemp for research purposes in accordance with the farm bill. We offered to take any differences in the interpretation of the farm bill to federal court. Instead, the Obama administration sent agents to destroy our crop while allowing recreational marijuana in Colorado. I just wish the President would explain to tribes why we can't grow industrial hemp like states, and even more importantly, why we don't deserve an opportunity to make our argument to a federal judge  rather than having our community raided by the DEA?"

The Tribe had engaged in numerous face-to-face consultations with former U.S. Attorney Jim Santelle and current acting U.S. Attorney Greg Haanstad about the industrial crop, according to the statement.

Final samples for testing of the industrial crop were drawn earlier this week during harvest by Bureau of Indian Affairs Agents.

"What makes the actions taken today even more difficult is that the federal government is very  aware of the great unmet needs of the Menominee. Menominee County ranks at the bottom of the state in poverty and health statistics. The Tribe is trying to meet those needs by researching the potential economic opportunities of industrial hemp just as Congress intended when passing the Farm Bill," said Chairman Besaw.

Industrial hemp crops are currently being grown in Kentucky and Colorado.

The Tribe had offered to destroy certain strains of the industrial hemp crop that both sides had identified as problematic and offered to file a Declaratory Judgment Action in United States District Court for Eastern Wisconsin to allow a federal judge to decide the dispute.

CBS 58 reached out to U.S. Attorney's Office, but they declined to comment.