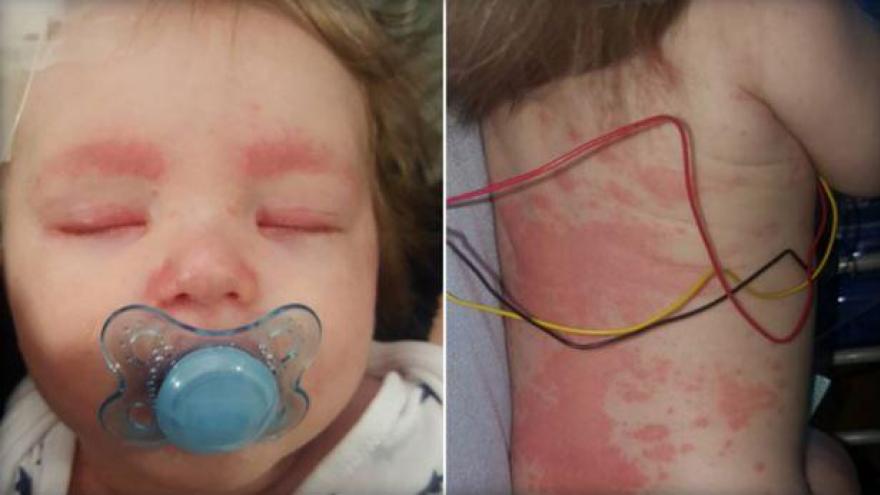 (CBS) When Annabella Hanslow took her 16-month-old son, Ashley-Jay, to the doctor due to concerns over a continuous temperature, she noticed just a “few spots” on his back during the exam.

They seemed to disappear, so the 26-year-old mom from Rushall, England, and her doctor thought little of it. But Ashley-Jay’s health quickly took a turn for the worse, and just 12 hours later, the bumpy red spots had spread over his entire body.

After rushing the little boy to Walsall Manor Hospital, where he underwent a series of tests, Hanslow soon found out he had bacterial meningitis and septicaemia — a life-threatening infection of the blood, also known as sepsis.

“The rash just disappeared under a glass test,” Hanslow told CBS News. “All of the leaflets say [a meningitis rash] doesn’t disappear when pressed down.” Health officials say that while “a classic symptom of meningitis is a blotchy rash that doesn’t fade when a glass is rolled over it,” the method is not foolproof and “many cases” don’t appear this way.

Hanslow said once she realized her son had a different rash than doctors normally come across when diagnosing meningitis, she decided to share photos of her son’s bright red rash on Facebook to warn other parents who may see something similar in the future. The post went viral with nearly 4,000 shares since it was posted on March 9.

“When you ring up emergency services, they ask if the rash disappears,” Hanslow said. “You will say ‘yes’ and then they’re not concerned. I hope they realize that leaving it for so long can be dangerous.”

Ashley-Jay has been in the hospital for the past five days, receiving antibiotics, fluids and undergoing blood tests to check his infection level. Doctors told Hanslow to be prepared for him to get worse.

He is on a feeding tube and his oxygen levels keep dropping, so he occasionally needs to wear a mask, Hanslow said. Within the next few days, he’ll have a stomach ultrasound and a head ultrasound, because they’re both swollen.

“Realizing that I left it for so long is heartbreaking,” Hanslow said. She urged other parents to trust their instincts if they feel like something’s wrong with their child, and to act quickly if they see similar symptoms so treatment can start as soon as possible.

“Early diagnosis and treatment are very important,” says the U.S. Centers for Disease Control and Prevention.

Meningococcal disease affects around 2,000 people in the United Kingdom and Ireland each year, according to the Meningitis Research Foundation, while in the U.S., the CDC says there were about 550 cases reported in 2013 and the numbers have been declining since the late 1990s.

The first symptoms usually include fever, vomiting, headache and red spots — a telltale sign Hanslow originally missed. Patients also may experience neck stiffness. The disease can progress rapidly and can be fatal. The CDC says between 11 and 19 percent of survivors will be left with long-term disabilities such as deafness, loss of a limb from infection, or brain damage.

“It all happened so fast,” Hanslow said. “Please, if anyone is worried [their child] has this, go get checked as soon as possible.”