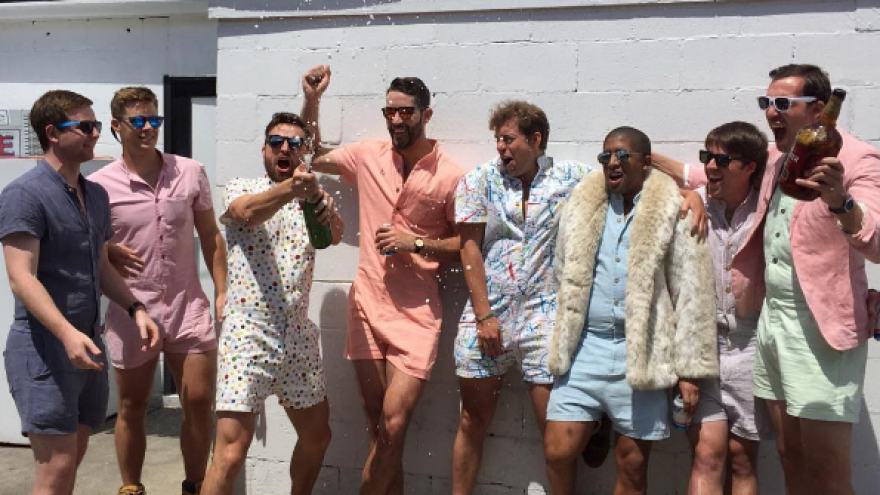 And if you are unfamiliar with what a romper is, it is a one-piece garment that first launched in American children’s clothing in the early 1900s, then grew popularity as a women’s clothing trend in 2006, said to be a fashion comeback from the 1970s.

But now there are “RompHims.”

“We’re revolutionizing men’s fashion and we didn’t stop at product ascetics,” the Kickstarter page reads. “We tested our RompHim on guys of all shapes and sizes to make sure we offer something for everyone, and our button-waist tabs help you get the most flattering contours possible. We promise once you put it on you won’t want to take this thing off.”

Thanks to a successful Kickstarter campaign, ACED Design began production of the RompHim this week. With only launching Monday and with a little less than a month to go, the campaign already raised $62,796 of their $100,000 goal and has received over 600 backers.

RompHims are designed, created and manufactured in Chicago.

The Original RompHim is a one-piece garment, featuring a button-up front with a shirt pocket, an adjustable waistband, a zippered back pocket, a zippered fly and two deep front pockets.

Yes, the men have it easy with the zippered fly…

“While our female friends love their rompers, the biggest complaint we heard from them was the whole ‘getting fully undressed to go pee’ thing. Luckily, this sturdy metal zipper simplifies that process for guys,” the Kickstarter page reads.

And guaranteed pockets! You know, females would love some pockets too – not all of women’s rompers feature pockets.

For the initial launch, the company is offering four colors and fabrics options: red chambray; blue chambray; splatter-print cotton; and a red, white, and blue 4th of July special edition RompHim with guaranteed delivery by July, 4 2017.

So where did the idea of RompHims originate from?

“We were sitting around over drinks one evening and got to talking about men’s clothing options out there. Everything was either too corporate, too fratty, too runway or too basic. Something was missing. Why wasn’t anything out there that allowed guys to be more stylish and fun without sacrificing comfort, fit and versatility,” the Kickstarter page reads. “The more we thought about it, the more we realized that a romper hit all of these attributes – it’s unique, fashionable, cool, and very wearable. But there was still one thing a romper didn’t have: a widely available version for men. So we set out to fix that.”

Want to order one? The Kickstarter campaign page clearly lays out sizing with a guide and gives multiple purchasing options.

After all Kickstarter orders ship, the company said they’ll be selling the RompHim online in additional colors, prints and fabrics.