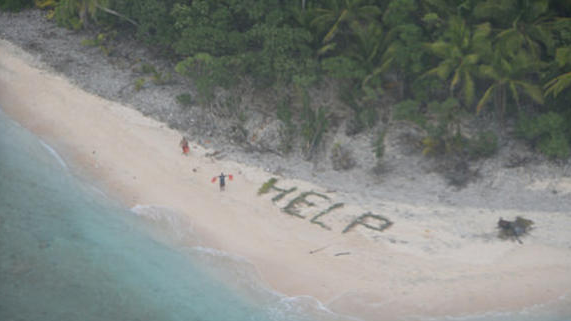 (CBS NEWS) It sounds like a page from a Hollywood script or an episode of "Gilligan's Island" but a dramatic rescue on an uninhabited island actually played out this week.

The U.S. Navy and Coast Guard on Thursday spotted three sailors who were stranded on a remote Pacific island after spotting their "Help" message written with palm leaves in the sand.

According to the Navy, the mariners' 19-foot boat capsized three days earlier, forcing them to swim more than four miles all night until they reached the Micronesian island of Fandadik.

A U.S. navy plane was dispatched to the area after they were reported missing and a small boat recovered the men from the island with no reported injuries.

"Our combined efforts coupled with the willingness of many different resources to come together and help, led to the successful rescue of these three men in a very remote part of the Pacific," said Lt. William White, Sector Guam public affairs officer.

The U.S. Pacific Fleet posted details and photos of the rescue on its website and Facebook page.