Meet the feline creation that could become first-ever robotic responder 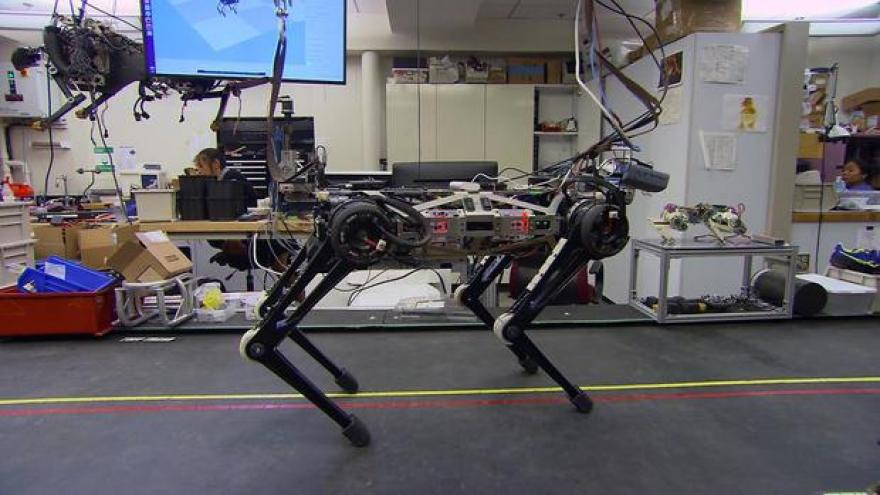 Scientists at MIT developed a cheetah you won't find in the wild. This robotic feline could one day reach places that are too dangerous for humans to enter.

The university is hosting some of the brightest minds in technology on Monday for the first-ever tech crunch conference. The very latest robotic technology and artificial intelligence will be on display, including a 90-pound, four-legged robot -- Cheetah 3.

Powered by a complex algorithm made of aluminum, she's one-of-a-kind in the robot world. Using less energy than a microwave, Cheetah 3 is able to run smoothly with joints that can generate about as much power as a sports car. The hope is, one day, Cheetah 3 may become the first-ever robotic responder.

CBS News correspondent Dana Jacobson got a first look at the technology behind the robot.

MIT Professor Sangbae Kim and his team have been working on the cheetah for about seven years.

"When we first stated, you know, it's pure ambition to build something like a cheetah that can run and turn fast," Kim said. "A lot of people told me, like, 'You're trying to do something science fiction.'"

Guided by the animal world, Kim set out to solve one of robotic's biggest challenges -- mobility.

"Everybody looked at the cheetah and said, 'Wow, look at that spine. Look at the backbone. It's bending and exploding. That's probably why they're fast,'" Kim said.

The machine cheetah reaches speeds of 30 miles per hour. Cheetah 3 has twice as much torque, or rotational force, than earlier models. And it's 12 joints give it four times more flexibility or range of motion.

"Robots cannot actually have as many muscles and joints like animals," Kim said. "Because increasing number of motors are too expensive. You need to actually increase the range of motion of each joint."

Cheetah 3 even responds to commands powered by Alexa voice technology. It packs sensors similar to the ones used in ballistic missiles. One day, Cheetah 3 may be used to care for the elderly or in disaster relief.

Within five years, Kim thinks Cheetah 3 could be deployed in dangerous situations like the Fukushima Power Plant meltdown.

"They haven't been able to send anything that can actually do physical work like closing valves or removing debris," Kim said. "Many power plants, where radiation level is high enough, that we don't want to send a human."

But, there are limits to artificial intelligence.

Cheetah 3 wasn't in the right mode to respond to commands, which is all part of the learning process. And while you may not be able to take Cheetah 3 home, some day, you may be able to 3D-print a robot that literally walks out of a printer.

Rob MacCurdy, a post-doctoral associate at MIT, can print a robot in about 24 hours. MacCurdy then adds what he calls the heart and brains of the robot -- the battery and the motor.

"I'm imagining robots like this that are expendable," MacCurdy said. "So, maybe they go down in some really dangerous place, or a really contaminated place, do some job, they go down and grab something and move it from one point to another. And then the robot is disposable."

"The battery is gonna die before he gets you," Tedrake said. "I think that there's a natural transition from the robots in the labs now into the robots doing meaningful work. I think we have to do that mindfully and we have to think a lot about the implications. But I think the potential for good is just so incredible that you wouldn't wanna stop it."

Over the weekend, Elon Musk referenced the idea that "if artificial intelligence isn't regulated, it will become a danger to humanity." On Tuesday, Jacobson will explore the idea of humans and robots working together, including a brain-controlled robot.