Medal of Honor recipient meets with Veterans in Milwaukee, talks about sacrifice 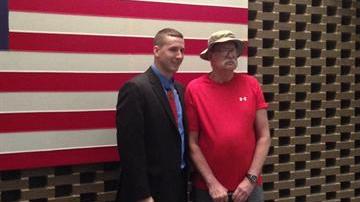 MILWAUKEE -- An Army veteran who recently received this country's highest honor for valor on the battlefield is in Milwaukee Wednesday. Former U.S. Army Staff Sgt. Ryan Pitts was at the Milwaukee VA Wednesday morning to meet with veterans and the staff.  It's the first time he's been to the Midwest or Milwaukee.

Pitts spoke briefly to the people gathered at the VA.  He then took time to meet with each person and take pictures.  Many people thanked him for his service and sacrifice.  Pitts is touring the country right now after getting the Medal of Honor last month.  His story is incredible, scary, and sad.

Nine of his fellow soldiers were killed in a bloody battle in Afghanistan in July of 2008.  Pitts said it was the most intense fight he'd ever been in.  He was wounded extensively during the fight.

He told us he's doing well physically now and is excited to meet with people across the country.

\"The award to me represents the sacrifices of our team that day,\" Pitts said.  \"The sacrifices of all service members. I think most importantly to me it's a memorial to the nine guys that we lost that day.   It's the legacy of our fallen, I got to tell the story for nine guys who can't.\"

Later Wednesday - Sgt. Pitts will be at Silver Spring Army Reserve Center in Milwaukee talking to future soldiers from Milwaukee, Madison, and Appleton.