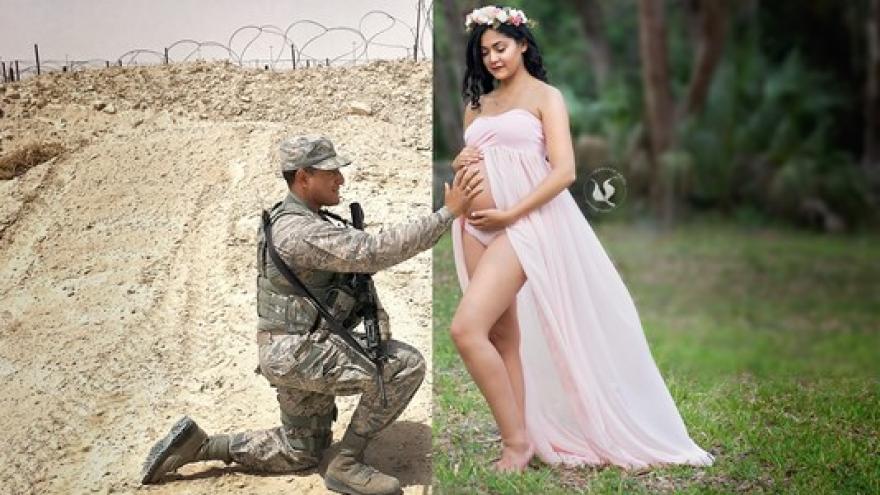 MIAMI (CBSMiami) – The phrase “a picture is worth a thousand words” couldn’t be more fitting as you look at a touching photo that’s gone viral. It’s from a maternity shoot bringing together a Homestead military couple separated by thousands of miles as they await the birth of their first child.

“Even though there’s distance between us, he’s closer. I mean that’s what I see. He’s there in spirit,” said expectant mother Veronica Phillips.

Veronica said her husband U.S. Air Force Staff Sargent Brandon Phillips was deployed overseas just a few months into her pregnancy and has never been able to put his hands on her growing belly.

Veronica says it was her husband who encouraged her to take the maternity photos but it was her idea to somehow include him.

The photographer who “photoshopped” the two together says she never expected such a huge response.

The photo has been picked up by many national outlets including People Magazine.

“Unfortunately, he won’t be able to touch her pregnant belly or see his son until after he’s born so it really meant a lot to people and to them to show that he was there,” said photographer Jennifer McMahon.

As the couple counts down to the baby boy’s June 10th due date, they plan to use technology on the big day to bridge their huge gap.

“Through the phone or iPad, we’re going to Skype the birth to be part of it,” said Veronica Phillips.

“She’s a trooper. She’s more of a soldier than I am,” said Staff Sgt. Brandon Phillips.