Marine embarking on 2500 mile voyage down Mississippi for wounded vets 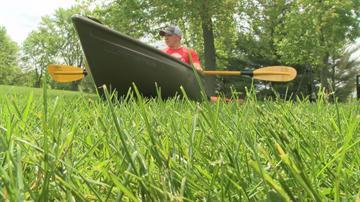 JEFFERSON COUNTY -- For the next 65 days, a kayak and tent will be home for UW-Whitewater Junior Nic Doucette.

\"Saturday morning, day number one, I'm ready,\" Doucette said while gearing up at his in-laws home.

The 27-year-old Marine veteran will pack up equipment and his hybrid kayak this weekend and head to the source of the mighty Mississippi River.  He's embarking on a 2500 mile voyage dedicated to two wounded friends.

\"Two of the Marines we served with, they suffered the loss of their legs from stepping on two improvised explosive devices,\" Doucette said.

Doucette spent seven months in Afghanistan, then spent the next few years thinking of ways to help injured soldiers.   Last May, the river called to him.

\"A few people committed right away, but then they backed out when they realized, you know, the Mississippi is going to take two-and-a-half months,\" Doucette said.

It's not nearly as wide or deep as the Mississippi, but Nic put in hours of training down the Rock River.   It's that experience and his military training he'll rely on.

\"Organizing and preparing has been a great thing that I've taken from the military and brought into this trip,\" Doucette said.

He poured over internet articles and contacted people who have made the trip before.  Fellow Marine Gabe Vasquez is joining too.

The Semper Fi Fund will benefit from Nic's journey -- every penny he raises will go to the group that helps wounded service members.

\"Rehab costs, modifications to vehicles, their houses and [Semper Fi offers] all these grants just to help in any way they can,\" Doucette said.

With a final check of the gear, a car ride north and Nic will embark on a trip he thinks will change the lives of others and his own.

\"It'll be a good, relaxing and just planning for the future adventure,\" Doucette said.

You can follow Nic's voyage and donate to his cause through his website.  Just head to the \"News Links\" tab at the top of this page for more info.