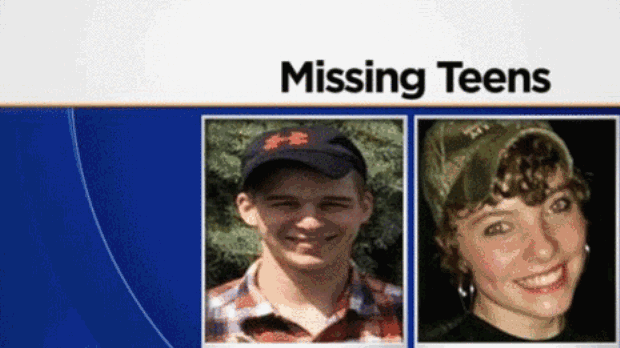 (CBS NEWS) Police are searching for a teenage boy and girl from Ohio who are accused in an armed robbery that left an officer injured early Thursday, reports CBS Pittsburgh.

It all began around 2 a.m. when an officer was called to the P&W mini-mart in Elizabeth Township, Pa. for a robbery in progress. When the officer arrived, the suspect reportedly took off running around the back of the store then hopped into a pickup truck and tried to speed off. The officer was able to hang on to the hitch of the truck for a while, before falling off.

Elizabeth Township Police say they believe a 15-year-old girl and a 16-year-old boy on the run from Ohio were behind the robbery.

\"Two young kids, and we just want to get them in for their safety and for the public's safety,\" said Asst. Supt. James Morton, of Allegheny County Police.

Investigators don't know what brought the teens to the area, but do know they're armed at the very least with a shotgun.

A pile of clothes and cash were found about three miles from the gas station that was robbed.

With the use of a K-9, police tracked down the evidence believed to belong to Triston Kindle, 16, of Upper Sandusky, Ohio, and Rose May, 15, of Sycamore, Ohio.

\"After searching all night and day out here... we've had all the local police - county police, state police with the helicopter. We made an extensive search throughout all these woods,\" said Asst. Supt. Morton. \"They were last seen at approximately 2 p.m. about a half a mile up the road here where they re-entered the woods again. We put a boat into the water along the edge of the river. We had ATVs up there with no success. So we just want to put out to the public again. We've been getting some calls. Anyone sees these two individuals, give us a call immediately. They've got to be tried and hungry.\"

Residents in Elizabeth were told to be on alert.

\"I made sure my doors were locked front and back. Double checked a few places around here ourselves, like under our porch,\" Deborah Hurlburt told the station.

The Elizabeth Township Police officer's arms were reportedly bloodied and his uniform tattered after being dragged by the pickup truck. The officer was treated for some minor injuries at the scene and is okay.

A state police helicopter was brought in to search the area for the vehicle.

The truck the teens allegedly ditched was found off Douglas Run Road in a wooded, hilly area near an old coal mine. It is believed to have been stolen.

Police in Ohio say the teens had previously stolen a truck near Kindle's hometown and also shotgun shells.

Police say to their knowledge, the teens have no connection to Elizabeth Township. Some of their family members came to the command post Thursday as the search continued.