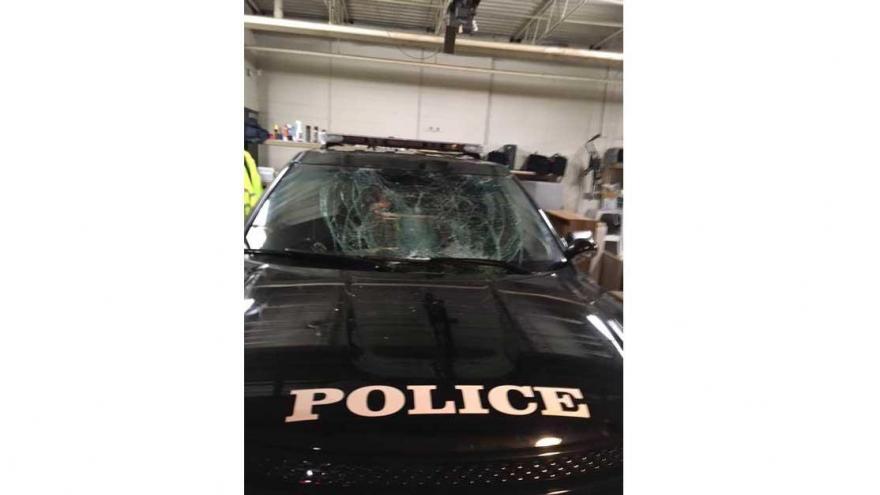 (WFRV) A Kimberly man that jumped on top of a Menasha police car wanted police to kill him, according to a criminal complaint.

Cody Romano, 25, has been charged with two counts of battery to a law enforcement officer, two counts of misdemeanor battery and criminal damage to property.

On New Year's Eve, police were dispatched to Oak Street and Nicolet Boulevard in Menasha for a report of a man who had jumped on a man and tried to choke him.

When officers arrived, they say that Romano began running toward the front end of the squad car.

The criminal complaint states that when the squad car came to a full stop, Romano jumped in the air and slammed his body on top of the squad car. Romano continued to jump on the squad car, causing the car to shake before returning to the windshield.

"The defendant admitted that he had hit the vehicle approximately 20 times and once he realized that he was not going to get shot, he got off the vehicle and started running away," the complaint says.

Romano was said to have charged at the vehicle again and an officer got out and tried using a taser on him, but it did not work. Romano tackled the officer, grabbed the cord of the officer's portable radio microphone and refused to let the officer go.

Another officer arrived and tried to help and that is when Romano bit that officer and would not let go. More officers arrived and were able to secure Romano, according to the complaint.

"The defendant further admitted that this was when he bit another officer's finger, and after he had bitten that officer's finger, he realized that the end result of this was not going to end the way he wanted it to, that being suicide by cop, so he just gave up," the complaint read.

The officer was sent for St. Elizabeth's Hospital for treatment.

Romano will be back in court on January 9.