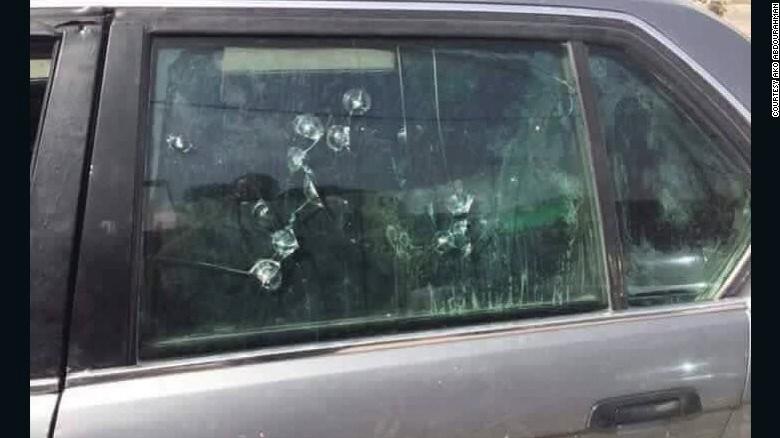 (CNN) When Ako Abdulrahman came under attack from ISIS militants advancing around the Iraqi city of Kirkuk, he realized he needed protection.

The Kurdish Peshmerga fighter decided to invest in an armored car, but he had little clue the vehicle would end up saving the lives of dozens of people.

After shopping around, he settled on a bulletproof BMW, and paid $10,000 for the early 1990s model at a car auction.

"My friends were very happy when I bought the armored car," he tells CNN. "We started driving in it to the front line near Kirkuk, not worried about ISIS drive-by shootings or roadside bombs."

Abdulrahman, 32, lives with his wife and four children in Taza Khurmatou, some 23 kilometers south of Kirkuk.

On October 21, dozens of ISIS militants carried out a coordinated series of attacks on the oil-rich city, targeting security forces and civilians in several neighborhoods; 64 died and 86 ISIS militants were killed.

More than 100 civilians and security personnel were wounded; many of them were left stranded because of ISIS militants' indiscriminate firing, while others were trapped by the terror group's snipers shooting from rooftops.

Abdulrahman knew he had to act.

He drove the armored BMW through the city, returning again and again to collect the injured, as ISIS gunmen peppered the vehicle with bullets.

"I kept telling myself, my people are in danger, they need me, my city is in danger, I have to protect it."

"When I arrived at the scene, I saw many people on the ground, civilians and security forces and no one could dare to come close because of ISIS snipers and random shooting," he says.

Abdulrahman says he used his car to transport more than 70 of the wounded to safety, and also ferried the bodies of the dead away from the attack.

"In my car, I carried Sunni, Shiite, Kurds, Turkmen and Christians. I felt like I am truly Iraq and this is who everyone should be," he says proudly.

"My car received more than 50 bullets, [there are] marks all over it," he says, adding: "ISIS kept shooting, hoping to penetrate my car to kill me and kill the wounded people inside it."

Kirkuk Gov. Dr. Najmaldin Karim personally thanked the Peshmerga fighter in a meeting at the governor's office. Karim also offered him a reward of 500,000 Iraqi dinars ($385) for his actions.

Abdulrahman says he did not realize the governor had put some money into an envelope when he left Karim's office after the presentation.

"I was happy with the certificate of appreciation from the governor, but I thought it's insulting to give me money for something every Iraqi should do," he says.

He says he turned down an offer from the German auto manufacturer to trade his bullet-riddled car for a brand new BMW, explaining that the firm wanted to display his old car at its headquarters.

Instead, he says, he opted to repair the original so he can keep using it.

"I am not a hero, I am only an ordinary Iraqi who wants to defeat his country from criminals and killers."