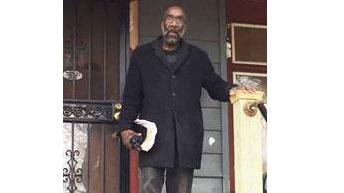 He calls himself Pastor Charles and has been seen on Milwaukee’s East Side and Riverwest neighborhood.

Hunger Task Force representatives wear a Blue Free and Local uniform and do not solicit money door-to-door. Contributions to Hunger Task Force may be made online through our website or sent through the U.S. Postal Service.

If you see this man, call the police immediately.

Hunger Task Force believes that every person has a right to adequate food obtained with dignity. Hunger Task Force works to prevent hunger and malnutrition by providing food to people in need today and by promoting social policies to achieve a hunger free community tomorrow.