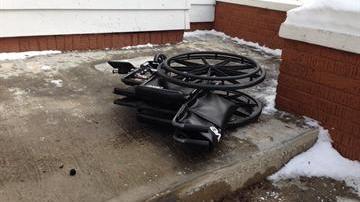 MILWAUKEE -- Beverly Anderson woke up to cold air rushing into her north side home around 6 am.

\"I looked in here and he wasn't in the chair,\" Anderson said.

She was searching for her husband, A.C. Anderson.  He wasn't in the chair she last saw him sleeping.

\"I looked outside and I saw him on the sidewalk.\"

She rushed out to find him out of his wheelchair on the sidewalk.  Nearly frozen.

\"I went out there and touched his head and it was like a block of ice.\"

Anderson believes A.C. was out in the cold for at least six hours.  She also noted he takes medication for possible schizophrenia.  Something she could never get him help for - mostly because he didn't want help.

\"He hallucinates and has psychotic events and everything else.\"

She thinks that could have played a part in him ending up outside, alone, on a frigid winter night.

\"It played a role. If it had been summer time and he had slipped off then he wouldn't be froze to death so yeah the cold weather did play a role.\"

Anderson says her husband used to be a carpenter.

Now she's left wondering what could have been done.

\"I'll get through this. I just wish the people had listened to me, because he'd be alive today if they had.\"