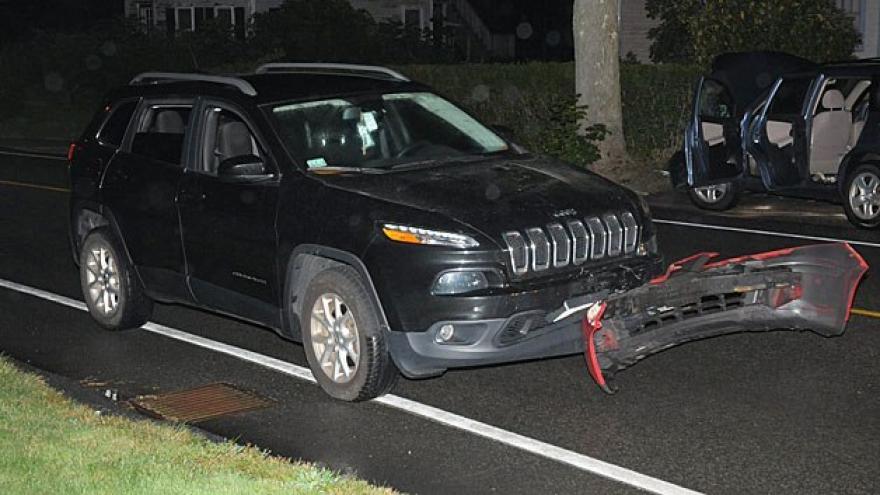 COHASSET (CBS) — A man was arrested over the weekend after police said he was caught driving with the bumper and license plate of another car stuck to the front of his Jeep.

According to police, an officer who was directing traffic around a separate accident spotted the Jeep on Beechwood Street in Cohasset Saturday morning.

They said when the officer approached the driver, 21-year-old Nicholas Ryan Boyle, of Hingham, and asked if he was involved in a crash, Boyle was confused and replied: “I did not think so.”

Around the same time, police received a call for a hit-and-run on Bates Lane, about a mile away from where Boyle was stopped. A black SUV reportedly hit a parked 2009 Nissan.

Police said the license plate stripped from the Nissan matched the one attached to the Jeep.

Boyle was arrested for OUI, driving to endanger, leaving the scene of a crash involving property damage, and failure to drive in the marked lines.

Officials also said Erin Feeney, 28, of Pembroke, was charged with DUI, driving to endanger, and failure to drive in the marked lanes, in connection to the crash that police initially responded to on Beechwood Street.

Boyle and Feeney will be arraigned in Quincy District Court on Monday.

Not a good idea to approach officer directing traffic w/ someone else bumper hanging out of ur grill. 21-yo M arrested for OUI this weekend. pic.twitter.com/daDDAb9nZN