Man convicted for fatal hit and run, family and friends show their support 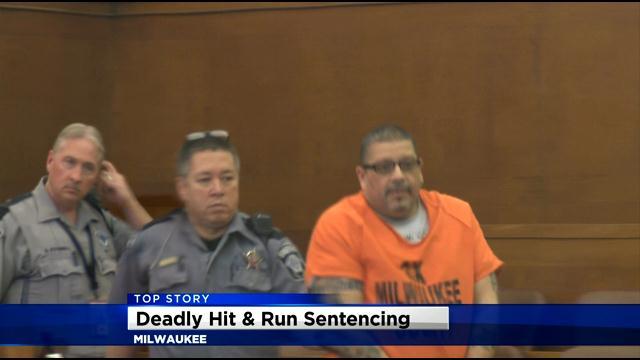 Victor Santiago, 49, was convicted Monday (April 27) for killing Alfredo de la O, 63, after drinking and driving back on November 23, 2014 in the Milwaukee County Courthouse. Judge Timothy Dugan sentenced him eight years in state prison and five years of extended supervision.

Santiago received a lot of support from his friends and family. Santiago's friend of 15 years, Timothy, was the first to testify describing the defendant as “trustworthy” and a person with a “big heart.”

Judge Dugan said Santiago's crime is a serious offense and that it was probably not the first time he got behind the wheel after drinking.

Santiago was driving a damaged white Chevy Avalanche after running over the victim and driving off, according to police. His blood alcohol level was .187 and he was also found with .23 grams of cocaine.

Santiago's family and friends didn't excuse his actions but asked for leniency.

\"He's a good man, people make mistakes,” said Jacquelin Blackhawk, Santiago's sister. “I am not justifying and I don't excuse it because I'm angry.”

Blackhawk said she prays for the victim's family every day.

“It was an ugly situation,” she said. “My father is sick, he takes care of my dad and it's just hard not having him home.”

“Eight years is a long time, we're just going to be sad, we're going to miss him,” Blackhawk said.

Santiago also addressed the court. He apologized to his family and the victim's loved ones.

\"I'm embarrassed for this crime,” Santiago said. I never thought in a million years I would be under these circumstances because of my selfish and inconsiderate decision that I had taken someone's life.”

“It's something I will have to live with for the rest of my life,\" he said.

The victim's family didn't ask for restitution, according to the prosecuting attorney.