NOW: Man charged in hit-and-run that injured family of 4 outside Fiserv Forum

MILWAUKEE (CBS 58) -- A driver has been charged in connection to a hit-and-run crash that happened outside Fiserv Forum on Nov. 9.

According to a criminal complaint, the vehicle struck the family of four near 6th and Juneau. Investigators say the striking vehicle with Texas plates, pulled over to the curb momentarily before speeding off.

Video surveillance shows the vehicle turn left into the intersection and hit the family, sending a 5-year-old boy tumbling several feet into the air. 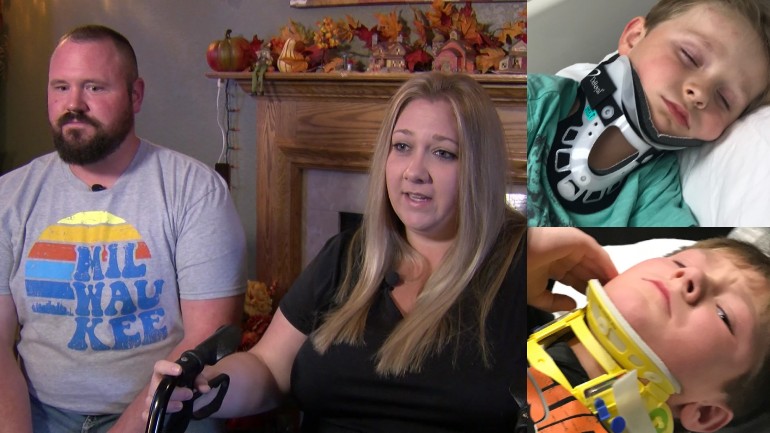 Investigators determined the vehicle was rented through Hertz by 21-year-old Christopher Covington's mother. She reportedly told officials if her son was involved in a crash and didn't pull over it was because he has a warrant.

Covington was taken into custody and interviewed. Officials say he gave several different versions of what happened including that the vehicle was stolen from him.

Authorities interviewed Covington's friend, who stated he was the front seat passenger when the family was struck. He told officials after the crash, he yelled for Covington to stop because he hit people. Covington reportedly yelled back he was "on the run" and he couldn't have contact with police.

Investigators were able to determine Covington was driving at the time of the crash through Instagram videos and data. The videos showed Covington in the driver's seat.

Danielle Eager, her husband Tony and their two sons were the victims in the crash.

She says she’s yet to fully heal from her injuries, and her boys are in therapy.

Eager says it’s a relief knowing the driver has been charged.

“I just don’t get how he can sleep at night knowing that he saw my son fly in the air and just continue to drive off,” she said. “It just shows what kind of person this guy is. I think it’s just messed up. You almost killed four people.”