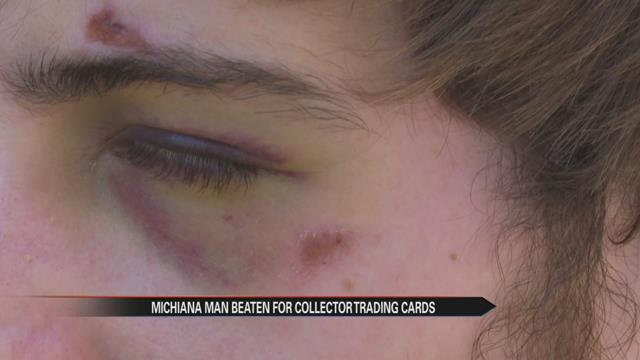 MISHAWAKA, IND. (ABC 57) On Thursday a brazen crime for some serious cash happened in Mishawaka.

A young card collector was beaten with bricks in front of his home for four binders full of Yu-Gi-Oh cards.

David Belonge says his world is turned now upside down.

The 24 years-old from Mishawaka flips through a binder of the only cards left in his collection.

“I started thinking about making a legitimate business with it [these cards], starting a company name or something but now I have to really re-think everything,” says Belonge.

Belonge says when he was a kid playing with the Japanese collectible cards, Yu-Gi-Oh was for fun.

He graduated from college last year and started an online store selling cards and other collectible items for an income.

“Overall the whole collection I would estimate around 10 thousand dollars,” says Belonge.

On Thursday night Belonge attended a card tournament at Fantasy Games in Roseland.

He brought four binders filled with thousands of Yu-Gi-Oh cards to the tournament.

Belonge says around 11 p.m. he made it home but did not even get out of his car before being jumped.

“I heard many footsteps run up to my vehicle and turned and looked and two people with shirts over their faces with bricks in their hands just started wailing on me on the driver’s side,” says Belonge.

Belonge says in total four men attacked him and he recognized the guys who left him with stitches, a swollen eye, and a bruised faced

There are advantages of being a tight knit community and Belonge is experiencing support from his fellow collectors.

“It breaks my heart that it happened and we are doing whatever we can to assist with the investigation,” says Mark Cracco, the owner of Fantasy Games.

Cracco is helping police with surveillance video of the suspects.

The owner of Realm Games in Elkhart started a go fund me page to help the Yu-Gi-Oh collector who is now an armed robbery victim.

“This is level of crime is rare. It’s the first time I’ve ever heard of it happening in this area,” says Cracco.

Mishawaka police are still investigating but Belonge says he will press charges.

Belonge did not suffer any permanent injuries but he hopes to get his collection back, that took him two years and $3,000 to build.