Maine Gov. LePage: "I made a mistake" in Describing Drug Dealers 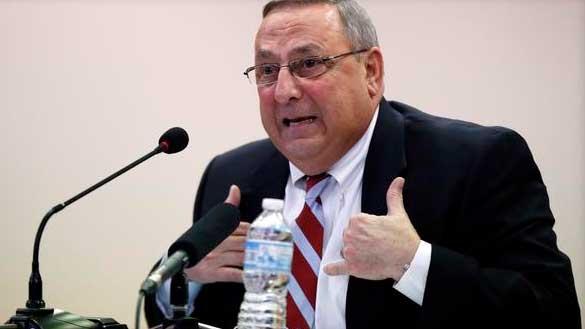 (CBS NEWS) Maine Gov. Paul LePage (R) on Friday admitted he made a mistake earlier this week for language he used to describe drug dealers, but was reluctant to apologize.

"I made a mistake and I'm not perfect, but I will not stop correcting myself and bringing the issue at hand: Drugs, drugs and more drugs. Beatings, beatings and more beatings," LePage told reporters at a press conference.

LePage, one of two sitting governors who has endorsed GOP candidate Chris Christie, has come under fire for comments he made Wednesday in which he described out-of-state drug dealers as "guys with the name D-Money, Smoothie, Shifty" and "half the time they impregnate a young white girl before they leave."

"I was going impromptu and my brain didn't catch up to my mouth," LePage said Friday, but said, "I'm not going to apologize to the Maine women for that."

"If you want to make it racist, go right ahead. Do whatever you want," he added.

LePage said the media should be ashamed for focusing on his words that were mainly circulated by a blogger.

Later in the press conference, the governor said, "If I slipped up and used a wrong word, I apologize to all of the Maine women." But later on, he again said he wouldn't apologize.

Asked about the names that he used to describe drug dealers, LePage said, "I never said anything about white or black on traffickers." He said he gets reports that say street names for drug dealers are D-Money or Smoothie.

"I don't know if they're white, black, Asian, I don't know," he said. "I apologize again, my brain was slower than my mouth."

The governor said his goal is to get rid of domestic violence and get drug dealers off the street so fewer people die.