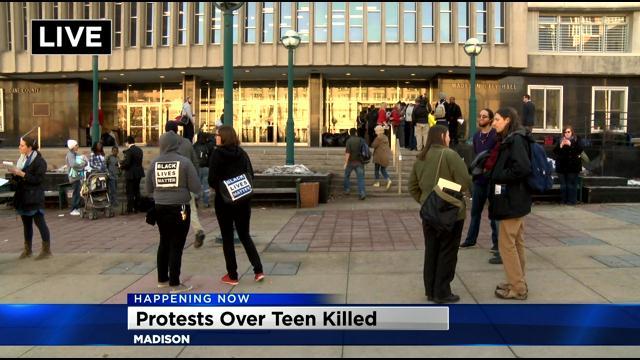 On Tuesday, Madison Mayor Paul Soglin held a press conference urging everyone to let the investigation take its course into the fatal officer involved shooting of 19 year old Tony Robinson.

\"This has been a very trying time for all of us in the city of Madison,\" said Mayor Soglin. \"We're far from seeing this tragedy come to resolution. But we're very pleased as to what has happened and how the demonstrations have gone to date.\"

The mayor thanked supporter and the Robinson family for not making their gatherings anti-police events.

He also said he doesn't think there are similarities between Madison and Ferguson, Missouri where a fatal officer involved shooting resulted in violent clashes and destruction of property.

Members of the Madison Young, Black and Gifted Coalition gathered Tuesday night where Dane County Board members were meeting.

Madison Police say Robinson was shot and killed by Officer Matt Kenny after some sort of physical struggled between the two.

Wednesday is being called a \"Day of Action\" in Madison.

Activists from all over the state are expected to gather.