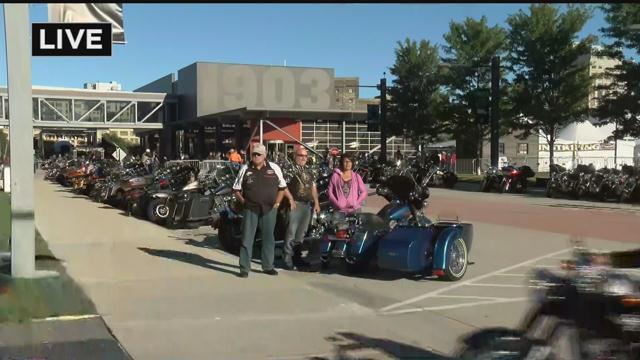 The Milwaukee Rally began Thursday night during the regular bike night at the Harley-Davidson Museum.

Five local dealerships also providing not stop fun and entertainment over the weekend.

The majority of events are free.

Whether you're on two wheels or in a cage, the idea to stop by each of the locations and soak in the culture that put Milwaukee on the map.

"This is the biggest party of the year for us," Tim McCormick of the Harley-Davidson Museum explained. "We like to say we're inviting 100 thousand of our closest friends and family."

Bill Davidson was on hand to show off the first production motor with eight valves. Four in each cylinder head.

It's a great time to visit with old friends or make news ones while drooling over all the bikes.

There will be free self-guided factory tours at the Harley-Davidson Powertrain Operations on  Pilgrim Road  between nine and two on Friday.

In addition, the Museum is one of the first places to see the new 2017 Harley-Davidson® motorcycles.

Swing by the new product trailer and check out the new models including the new Milwaukee-Eight engine.

Enjoy the works of custom culture artisans and visit the special summer exhibit, Drag Racing: America's Fast Time before it closes on September 5.

The entire weekend is packed with live entertainment, and lots of great food and drink.

To catch a glimpse of the MotoPhoto Show click here