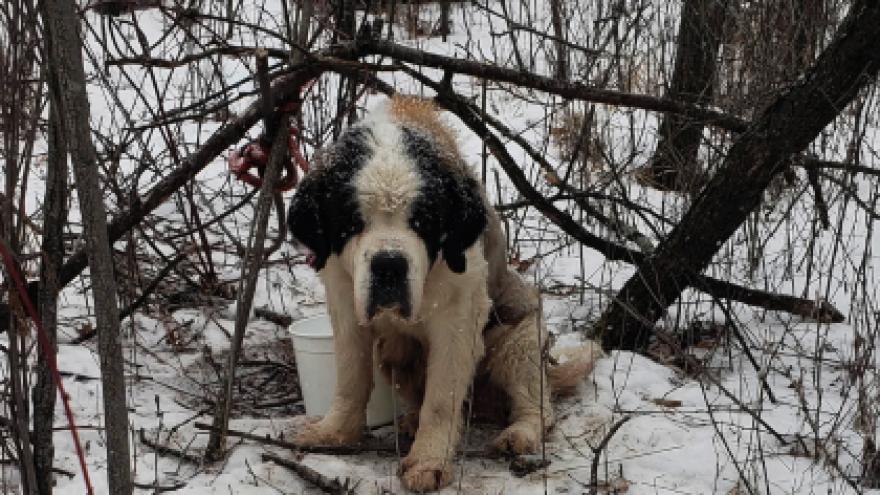 MINNEAPOLIS (WCCO) — In the world of dog rescues, it’s nothing less than a miracle. After 17 days lost in the woods, a St. Bernard named Old Lady is exactly where she is supposed to be.

Old Lady endured sub-zero temperatures and had no food or drink — but the tender-hearted pup survived.

“She is 10 years old, which is old for a St. Bernard,” said Azure Davis of Ruff Start Rescue.

But it’s not just her age that has her down. It’s been a long decade for this big dog.

“She has been living in a barn, puppy mill-type situation with over 500 dogs all her life,” Davis said. “You can imagine the socialization she’s had. It’s limited to none.”

On January 4, Princeton’s Ruff Start took Old Lady in. Shortly after, she took off running from a driveway.

“We knew right away we had to act fast because we knew she didn’t know where her home was, where to go back to there was cold weather coming,” Davis said.

Typically, St. Bernards have a heavy coat, but Old Lady had been shaved right before she got to the rescue. The timing could not have been worse. After a few weeks and negative temps, things got grim.

“Last week when we hadn’t heard anything, we thought, ‘How could she be alive?’” Davis said.

Seventeen days later, a man walking with his grandson spotted Old Lady. Her leash was stuck in some brush, and so was she.

“She was would up in their pretty good. She wasn’t able to move though, she couldn’t even lay down and from the looks of it she had been there for a few days stuck out there,” she said.

It took some coaxing, and some tuna, and at last they got her safely into a warm car. The vet says her vitals are strong and she’s not very dehydrated. They think she was eating snow.

Old Lady now has a new lease on life.

“Animals are good at hiding, or they’re stuck, so keep looking,” Davis said.

Old Lady will soon go to a new home. Her new mom is experienced with rescues and St. Bernards.