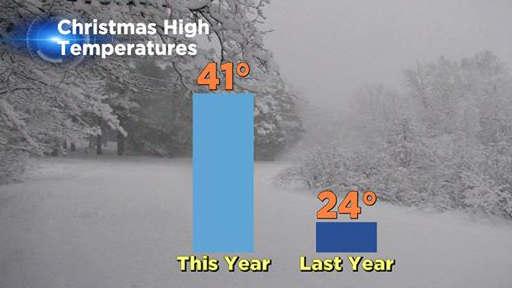 If you thought this Christmas felt a lot different than last year, you are very observant.  The high this holiday was 41 degrees (low of 34).  Last year, the mercury only reached 24 degrees (low of 15).  This Christmas, we were 14 degrees above normal for the day while we averaged four degrees below the norm on Christmas Day 2013.

This is only part of the story.  We definitely did have a White Christmas in '13 since there was a ten inch snow pack on the ground.  This time around it's nothing but a brown ground.

In case you were wondering, our warmest Christmas was in 1982.  This was a strong El Nino year.  We hit 61 degrees.  Just one year later, in 1983, the record low was established at -12.  And on Christmas Day in 1909, we had a record snowfall of six inches.  No one was dreaming of a white Christmas then.