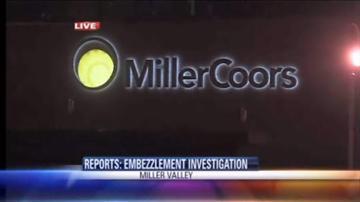 MILWAUKEE -- MillerCoors has uncovered an embezzlement scheme involving two of its former employees.

A spokesperson for MillerCoors tells CBS 58 News that the crimes came to light during an extensive internal and external investigation and named two former employees believed to be invovled.

\"MillerCoors believes former employee David Colletti embezzled several million dollars from the company over several years and that former employee Paul Edwards was involved to a lesser extent in the sceheme,\" a statement to CBS 58 News reads in part.

\"We are disappointed by this betrayal of pride and integrity by two long time employees of the company.  MillerCoors is seeking to recover the stolen funds from a combination of insurance and restitution in the criminal process,\" the statement reads.

Colletti and Edwards have been referred to federal authorities for criminal charges.

Stay tuned for the latest updates in this developing story.