Long-term lane closure begins this week on Westbound I-94 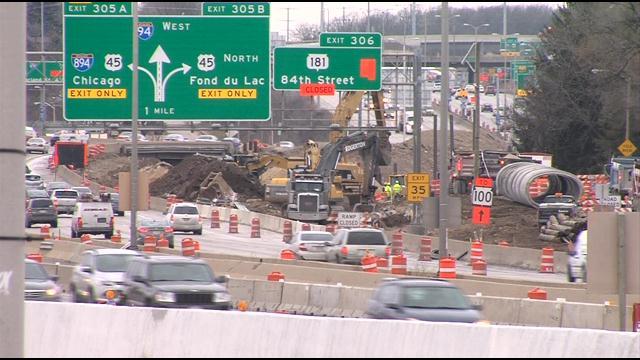 As cars pass by on Westbound I-94, commuters can expect things to slow down in the next few days.  Three lanes were open on Thursday, but come Saturday, it's down to two.

\"We're encouraging people to add a little extra time to their commutes,\" said Jason Roselle, a project supervisor with the Wisconsin Department of Transportation (WisDOT).

WisDOT officials say this will affect the stretch from 68th Street to 84th Street for the next year.  With snow season upon us, instead of white or yellow markings, the roads will be marked in orange-- much like what you see heading toward the Moorland Exit.

\"A year is a long time, but when it's done, it will be great,\" said Sarah Supan, a commuter.

Sarah Supan lives near the ramp on 68th Street.

\"Being that 76th and 84th Street have been closed, 68th Street is the only one open, and so there's been a lot more traffic,\" said Supan.

The congestion due to ramp closures are linked to the massive Zoo Interchange Project.

\"It's the busiest interchange in the state of Wisconsin, and it needs to be re-constructed,\" said Roselle.

WisDOT officials say the highway is more than half a century old, but some commuters emphasize-- it's not the only roadway that needs work.

\"I believe majority of the streets in Milwaukee need some more maintenance,\" said Terance Ivy, another commuter.

Upset or indifferent-- most commuters say they'll be happy, when it's over.

\"I'm excited for the change, we all need it once in a while,\" said Supan.