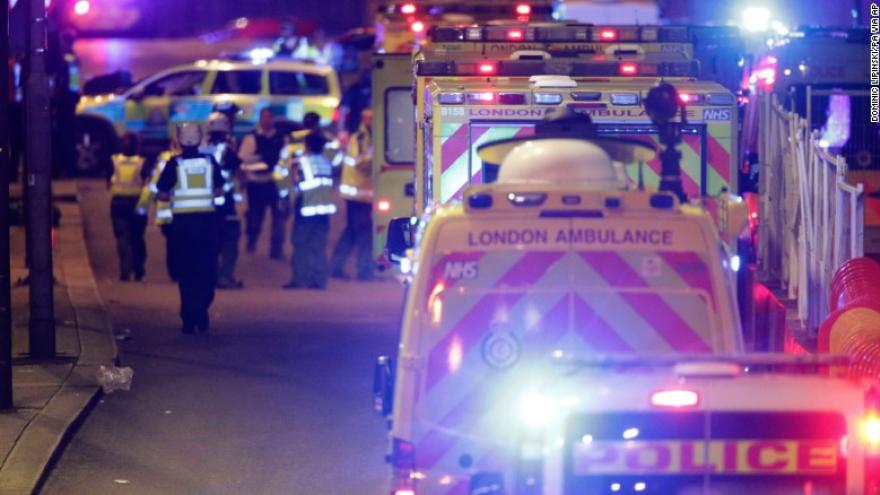 LATEST: CNN reports 12 arrests have been made during early morning raids on Sunday in London.

LATEST: According to London Metropolitan Police six victims are dead after Saturday's terror attacks in London. In addition to the victims, three terror suspects were shot and killed by police.

The ambulance service in London said it transported at least 20 people to six different hospitals across London.

LONDON (AP) — Terrorism struck at the heart of London, police said Sunday, after a vehicle veered off the road and mowed down pedestrians on London Bridge and gunshots rang out amid reports of knife attacks at nearby Borough Market.

The violence turned a summery Saturday night in an area packed with bars and restaurants into a scene of panic and chaos, with officers running through crowded streets screaming for people to flee and lifeboats drafted to help clear the area.

Police said multiple casualties were reported, and British media reported that more than one person had been killed in the rampage.

Prime Minister Theresa May said it was a potential act of terrorism and the Metropolitan Police force said it had declared the attacks as "terrorist incidents."

Police said they were called just after 10 p.m. (2100GMT) to reports of a vehicle hitting pedestrians on the bridge, which crosses the River Thames in central London.

Soon after, there were reported stabbings at nearby Borough Market, an area full of bars and restaurants.

The force said armed officers were sent to the scenes and shots were fired. They did not say if officers fired the shots.

The force initially said officers were also responding to a reported third incident, in the Vauxhall area of London. But they said later that turned out to be an unrelated stabbing.

The force tweeted a warning telling people in the area to run to safety, hide and then call police if it is safe to do so.

May said that "following updates from police and security officials, I can confirm that the terrible incident in London is being treated as a potential act of terrorism."

She said it was a fast-moving investigation and her thoughts were with "those who are caught up in these dreadful events."

May's office said she would chair a meeting of the government's COBRA emergency committee on Sunday.

About two hours after the first reports of an incident, television images showed people walking away from the London Bridge area with their hands on their heads. Police tweeted that Londoners should "remain calm but be alert and vigilant."

Nick Brandon of British Transport Police said the force had received reports of "multiple" casualties. He said he did not know how serious the injuries were.

Multiple witnesses reported a vehicle veering off the road and hitting several pedestrians; others also said they saw at least one man with a large knife.

Another witness, Will Heaven, said he saw people who appeared to have been hit, and one being put into an ambulance.

Soon after, reports came in of stabbings around Borough Market, just steps away from the bridge.

A man who gave only his first name, Ben, told BBC radio that he "saw a man in red with a large blade, at a guess 10 inches long, stabbing a man, about three times" near Borough Market.

Other witnesses reported seeing as many as three attackers with knives.

Gerard Vowls, 47, told The Guardian newspaper that he saw a woman being stabbed by three men at the south end of London Bridge. He said he threw chairs, glasses and bottles at the attackers in a bid to stop them.

"They kept coming to try to stab me . they were stabbing everyone. Evil, evil people," he told the newspaper. "I want to know if this girl is still alive. I've been walking around for an hour and a half crying my eyes out. I don't know what to do."

Medics treated people lying injured on the ground near the market as shocked people cried and shouted around them. Police officers yelled at people to run from the area.

Simon Thompson told Sky News that he was just outside Borough Market when he saw crowds fleeing.

"We ran for like 100 meters and then saw loads of police cars turned up and there was kind of a period of quite intense gunfire," he said. "I hid in a restaurant basement for about an hour. ... Police told us to get out and then there was more gunfire."

The Sun newspaper, whose offices are beside London Bridge, reported hearing explosions about three hours after the attacks began. It said the blasts were believed to be controlled explosions carried out by police.

As thousands of people flooded from the area — many unable to get home with nearby subway stations shut — locals were quick to offer assistance.

Phaldip Singh, who describes himself as an entrepreneur and youth activist, tweeted that Sikh Gurdwaras were open to provide food and shelter for those affected by the attacks. Gurdwaras are places of worship that traditionally serve simple meals to anyone, regardless of their religion.

The Royal Oak pub, near the attack site, opened its doors to people evacuated from hotels inside the area cordoned off by police. And at least one cab company tweeted an offer of free rides for people stranded in the area.

If confirmed as terrorism, this will be the third attack to hit Britain in as many months.

In March, a British convert to Islam ran down people with a vehicle on Westminster Bridge, killing four, then stabbed a policeman to death outside Parliament.

On May 22, a British suicide bomber killed 22 people and injured dozens at an Ariana Grande concert in Manchester. After that attack, Britain's official threat level from terrorism was raised to "critical," meaning an attack may be imminent. Several days later it was lowered to "severe," meaning an attack is highly likely.

A charity concert for victims of the Manchester attack, featuring Grande and other stars, is due to be held in the northwest English city on Sunday.

Niko Price in London contributed to this story.